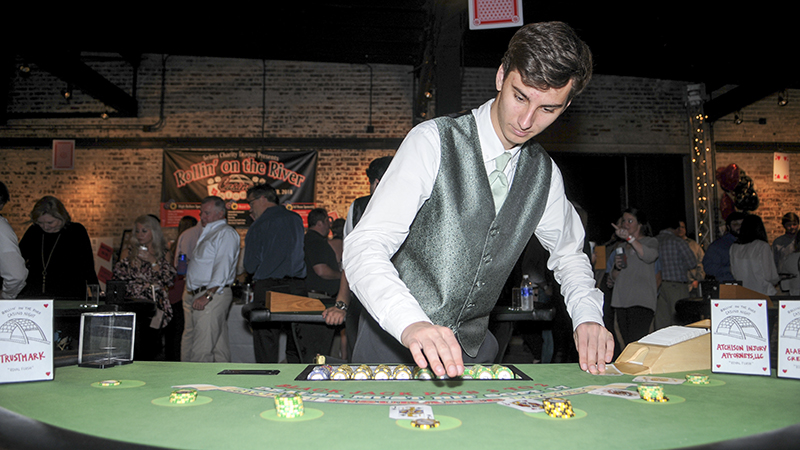 Tyler Maita, a dealer with Big Eastern Entertainment, deals a hand of blackjack Saturday night at the Selma Charity League’s “Rolling on the River” event, which was held at ArtsRevive. (Blake Deshazo | Times-Journal)

The Selma Charity League’s signature charity event, themed “Rolling on the River,” featured a night of bets, full houses and double-downs all for a good cause.

Benefiting the Selma Police Department and Selma Crime Stoppers with a target donation of $5,000, the casino-themed event featured four different types of games gambled with “funny money.” The Big Eastern Casino Company, based out of Atlanta, provided craps, blackjack, roulette and poker for the 200 participants in the fundraiser.

Hosted at ArtsRevive, tables featuring the different games were scattered throughout the reception, along with vendors providing beer, wine and food samplers.

While the charity league may have set a $5,000 goal for the event, president Anne Wilkinson says that they should exceed that total.

The Selma Charity League did so well that they made their goal before the gambling even began.

League member Meagan Austin attributes the success to the high demand to bring back the casino theme, which has been used in years past.

“This is definitely one of the bigger events we have put on,” Austin said.

“We did this around five years ago and we received a lot of feedback from people asking us to bring it back.”

Also at Rolling on the River was “dart poker,” were participants paid $5 for six darts and their chance at different prizes.

The money used to buy the admission tickets provided individuals with “funny money” to use to gamble and win raffle tickets, with varying totals depending on the level of sponsorship.

The tickets were then used to win a slew of different prizes.

With Rolling on the River anticipated to go above their goal, Wilkinson is encouraged and delighted to use all the funds to benefit those trying to serve the community in law enforcement.

“We need to help them and give back. The sponsors were so helpful and willing to give money when they knew it was going towards law enforcement,” Wilkinson said.

With a high turnout and positive expectations, both the Selma Police Department and Crime Stoppers can expect more money headed their way.

Although this may be their signature event, the Selma Charity League puts on other events as well, such as pancake breakfasts, yard sales and golf themes.

The positive turnout for Rolling on the River comes after Wilkinson and the charity league decided to change the date of the signature event to the beginning of the year, instead of in the fall or spring.