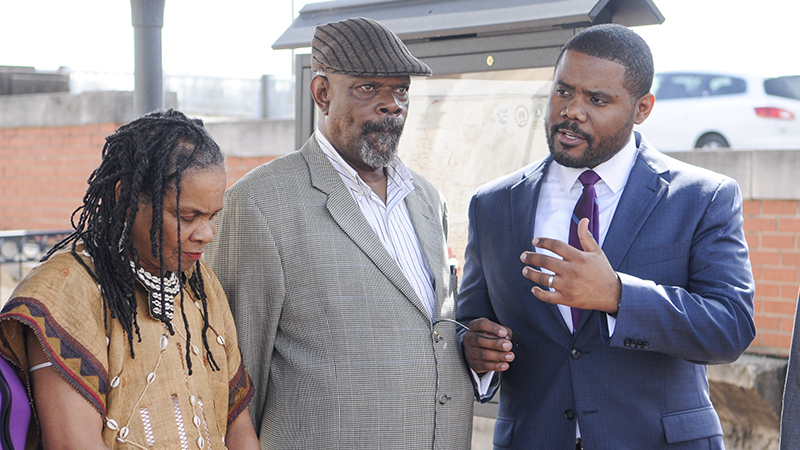 Selma Mayor Darrio Melton speaks at the foot of the Edmund Pettus Bridge Thursday during a press conference announcing the move of the Bridge Crossing Jubilee’s street festival back to Water Avenue. Melton was joined by Rose Sanders, Sam Walker and other Jubilee organizers. (Blake Deshazo | Times-Journal)

City leaders and organizers of the Bridge Crossing Jubilee gathered at the foot of the Edmund Pettus Bridge Thursday to make the announcement of the festival moving back to Water Avenue and their partnership official.

Last year, the city and organizers were at odds over a request for organizers to pay for services that were in-kind in previous years. The dispute led to the festival being moved to the Selmont side of the Edmund Pettus Bridge on private property.

“I am so glad that we have reached an agreement for the betterment of this city,” said Bridge Crossing Jubilee founder Rose Sanders.

Sanders was joined by other event organizers, as well as Mayor Darrio Melton and some members of the Selma City Council.

“This was about all of us coming together from different walks of life to tell the story of Selma, to celebrate Selma’s history,” Melton said.

Melton said this decision was a joint effort between the city and event organizers.

“As we move forward, this is what we want in the city of Selma, partnership across the board to make events like this possible inside this historic city,” Melton said. “We’re looking for a great opportunity this upcoming Jubilee.”

“What’s exciting is that we came together and collectively decided it was best for the city of Selma to move back, I was perfectly satisfied across the river because that’s where the beatings took place, but it caused so much conflict and disunity,” Sanders said.

Sanders said the Jubilee is pushing a “Do Something for Selma” campaign and encouraging visitors to spend money in Selma and make a difference while they are visiting.

The Selma City Council voted Tuesday night to accept funding from the Jubilee and committed to support it, as well as the Battle of Selma. Jubilee organizers have pledged $5,000 to help pay for services such as police protection, crossing guards and cleanup from the city’s public works department for the street festival event.

Councilman Michael Johnson, who made the motion to support the Jubilee and Battle of Selma, said the council could spend anywhere from $7,000 to $10,000 for the Jubilee. The money could come from the Brown YMCA fund or money budgeted toward tourism.

Johnson’s motion was not specifically to move the festival, but an agreement was reached between the city and organizers.

This year’s Jubilee marks 25 years since the event’s inception. It is scheduled for March 1-4 with more than 30 events.

After the press conference, Melton clarified the agreement between the city and event organizers is solely for the street festival, which will take place Saturday, March 3.

Melton said he hopes to see the partnership grow and help the event grow even bigger than it has already become.

Jubilee to move back to Water Avenue