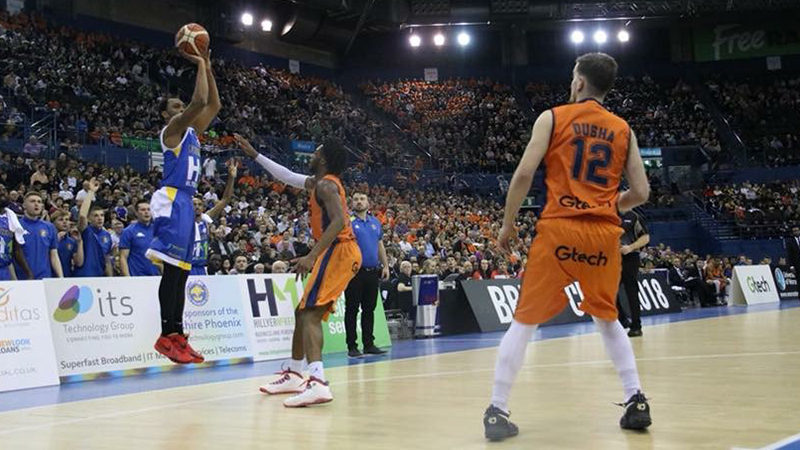 Selma alumnus and BBL Cup Title MVP for the Cheshire Phoenix shoots a 3-pointer. The Phoenix defeated the Worcester Wolves 99-88.

Malcolm Riley took the path less traveled throughout his basketball career, but he stuck with his dream and led the Cheshire Phoenix to its first-ever British Basketball League (BBL) Cup title this past January.

The Phoenix defeated the Worcester Wolves 99-88 on Sunday, Jan. 28 at the Arena Birmingham in Birmingham, England. Riley, a graduate of the Selma High class of 2011, had 26 points, nine rebounds and three assists and was named MVP of the title game.

“I worked really hard to get to this position,” Riley said. “The hard work is finally starting to pay off. It took time to get here, and to do it on such a big stage was a big-time thing for me.”

Riley is in his second season with the Phoenix, and has endured a long road on his way to being named the Cup title MVP.

“It was like a dream come true,” he said. “To get to play on a national stage like that with 10,000 fans, and my family back home got to see it. It was a surreal moment.”

While at Selma High School, Riley played under former head coach Woodie Jackson. After high school he attended Faith Baptist, a prep school in Florida. It wasn’t a good fit for Riley and he dropped out after just five months.

Even though he left Faith Baptist, Riley still wasn’t done with basketball. He left the prep school in February 2012, and returned to Selma. One of his former coaches, Charles Smith, took him under his wing and helped him train for his next opportunity.

“He was a big influence in me getting to where I’m at,” Riley said. “He helped my game a lot, and he taught me some things that really helped. Without him, I don’t know if I would’ve believed in getting this far.”

Smith worked Riley out hard as often as they could during his breaks from school for two years straight. An intense regimen of skill training and conditioning kept Riley in basketball shape.

“It was non-stop,” Riley said. “We would go to the gym three times a day. He had me running around Bloch Park. He used to have me pushing cars in the middle of Bloch Park, and then we would go play at the Lunch Bunch down at the YMCA.”

According to Smith, Riley was serious about improving his game after his fall out in Florida.

“I showed him how to push himself. At Bloch Park I made him jog five or six miles a day. I made him a daily regimen of 300 to 500 pushups, jumping rope and continuously mentoring him in every aspect of his life off the floor too,” he said. “So, he came back from Florida hungry because of some negativity that he experienced. I’m very proud of him. He saw his life and basketball career going in a certain direction, and he wanted to change that. He made a conscious decision to do more, listen to me and work harder. As we can see, he’s been quite successful.”

Leaving Faith Baptist didn’t derail Riley, but pushed him into another direction. He attended Chattahoochee Tech in Atlanta, Georgia, in September 2012. He then transferred to Trinity Valley in Athens, Texas, for the 2013-2014 school year.

After two years of junior college and intense summer workouts, Riley transferred to Texas Southern in Houston, where he played Division I basketball from 2014-2016. While at Texas Southern, Riley won a SWAC championship and played in the NCAA March Madness tournament.

After college, Malcolm got his first job as a professional basketball player playing overseas for a team in Germany called the ETB Wohnbau Baskets. But his first stint in a professional league didn’t go as planned.

“After Texas Southern, I went to Germany and I got cut,” Riley said. “My first job, and I got fired. That was a wake-up call.”

He was only with the team for two months, and he had a feeling that it wasn’t going great. He got hurt, and his team wasn’t winning games.

“It was a real sad, dark time for me,” he said. “But I knew that I wasn’t finished, so I just stayed ready.”

His next opportunity came with the Sheffield Sharks. They signed Riley and he proved to himself and the rest of the BBL that he wasn’t ready to quit. In his first year with the Sharks, the team lost in the first round of the playoffs. But they had shown signs of improvement toward the end of the season. Riley was healthy and making plays. He led the Sharks in scoring and was the player of the year for the team.

“I finished strong and I made a name for myself in this league,” Riley said. “That helped me the following year, which is now, to put people on notice.”

This past July, the Phoenix signed him and his game continued to improve. 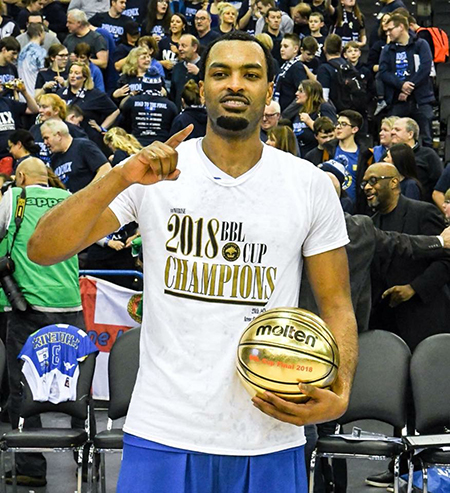 Riley’s journey to his MVP performance is rooted by his love for the game. Despite the detours and setbacks, he stuck with it and the results are beginning to show.

“I really didn’t even think I’d be this far,” he said. “It’s every body’s dream to make it to the NBA, and unfortunately, there’s only X amount of spots.”

Riley said that the coaches and players that he met since he left Faith Baptist, encouraged him to keep going. The ball didn’t have to stop bouncing. They reminded him that it didn’t have to be over.

“I always had this fire inside me,” he said. “Even from a young age, I never let somebody stop me from my dreams.”