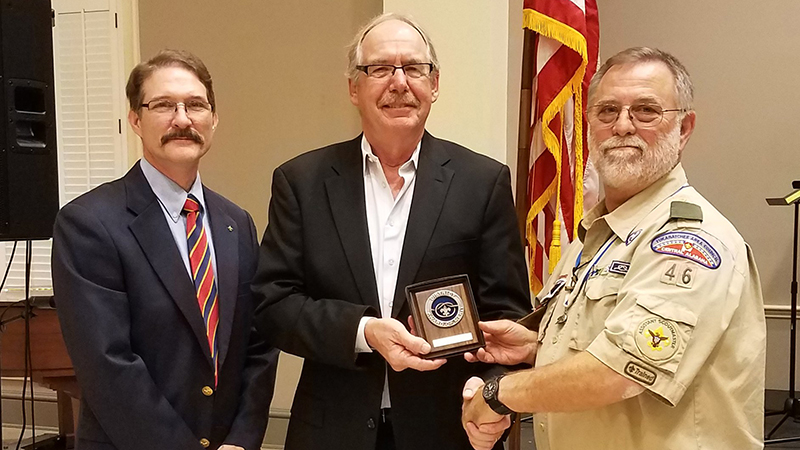 Jerry Worthington (center), president of Bush Hog Inc., was awarded the District Award of Merit by the Tukabatchee Area Boy Scouts. The award is the highest honor for a volunteer. Also pictured are Leith Wilson (left) and Harold Wells (right). (Submitted Photo)

A local businessman has been awarded the highest volunteer honor for his commitment to excellence for the Boy Scouts of America.

The award is only eligible for volunteers of the Boy Scouts, and it is not an annual award. Rather, it is only given out when the Boy Scouts deem someone as worthy of the honor for going above and beyond the call of duty.

After receiving the appreciation from the Boy Scouts, Worthington was honored of his recognition. He understands that success in the Boy Scouts all starts with leadership at the top.

“I was very proud to be given this in front of many members of the council,” Worthington said. “One thing I have learned as a parent involved with the Boy Scouts is that success is very dependent on the leadership.”

Worthington is receiving this award largely for his efforts at connecting the Dallas County community to the Boy Scouts through avenues they did not know were available. Using a program known as Scout Reach, Worthington was able to recruit and educate potential members from untapped areas.

While he may be a volunteer, his commitment to the Boy Scouts dates back to his early childhood.

Worthington began his journey as a six-year old Cub Scout in 1959. After getting his son involved at an early age in the 90’s, he watched him rise in the ranks to become an Eagle Scout, the highest rank available. After decades of dedication, he moved on to become the Chairman of the Boy Scout’s Crane District Committee.

He has done just about everything the Boy Scouts have to offer, but promises to not slow down just yet.

“I have no plans to do anything less for them,” Worthington said.