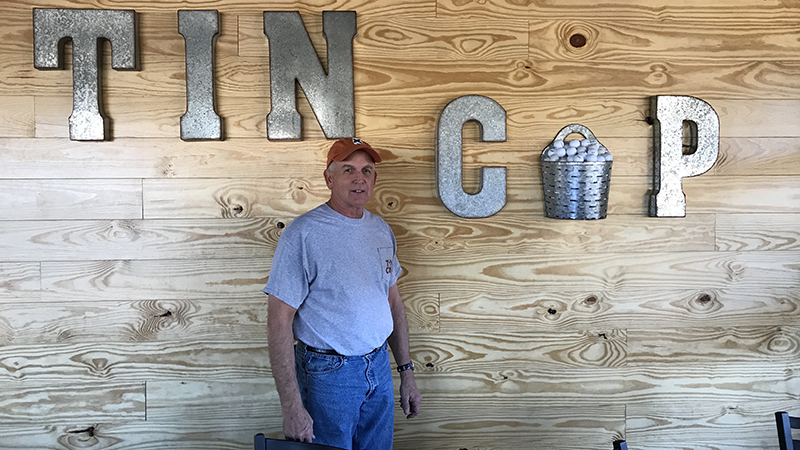 A local golf course has received a new addition to its atmosphere with the opening of its new golf-themed restaurant, the Tin Cup.

Inspired from the Kevin Costner golfing movie by the same name, Valley Grande Golf Course owner Steve Smitherman turned his vision of transforming the clubhouse into a restaurant.

Like the golf course, it is open to all members of the public, with members receiving discounts.

The owner of Smitherman Brothers Construction, Smitherman and his son, Ross, began working on the project around eight months ago. He had previously saved the golf course from shutting down around six years ago. His wife, Sybil, says he “revived” the golf course.

After turning the golf course around, it was time for his next project of providing the golfers with a central location to relax, eat, watch football or have a drink.

The Tin Cup is nestled in the back of the golf course neighborhood, formerly known as Ocmulgee. Not conveniently close to any sort of restaurants, Steve helped fill the void.

“People out here need somewhere closer to eat. We have about 75 families in or around the neighborhood. They will drive down on their golf carts and grab a quick bite to eat and head back home. So far, they have been very excited about it,” Steve said.

According to Sybil, their forward-thinking mentality is also inspired from by a famous Kevin Costner movie.

“We thought ‘if we build it, they will come,’” Sybil said.

The restaurant went all-in on the golf-themed atmosphere. Memorabilia decorates the walls. A giant “Tin Cup” sign with the “U” represented by a bucket of golf balls hangs from one wall of the venue. The windows all open garage-style to the scent of fresh-cut grass.

The menu takes on a golf theme as well. Items include the Practice Round (appetizers), On the Green (salads), The Fairway (meat), The Grips (sandwiches and flatbread), Caddies (sides), Birdies (sauces) and Victory Lap (dessert).

According to the Smitherman’s the Tin Cup has been a hit so far. On their soft opening last week, Thursday, Feb. 1, they had a rush of 45 people come in at once. The venue can sit 50 people indoors and around 100 people with outdoor seating available.

Steve says he expects to draw in crowds from Selma, Valley Grande, Marion and Centreville.

The Smithermans are also optimistic that the early success found during the winter months bode well for their business headed into the warmer months, when golf is typically played.

Steve says that they chose to open during winter so it gives them time to figure out the best way to operate their daily routines. After the large rush on opening night, Steve says the staff is “rolling” and settled in.

“Starting now gives us a chance to figure things out before it gets crazy,” Steve said. “We want to figure out our process before the warmer months.”

The restaurant will not only be used as a venue for hungry golfers, but will also host larger scheduled events, such as wedding receptions, meetings and ceremonies. The Tin Cup already has one wedding rehearsal dinner booked and are in discussions with hosting an event for the Valley Grande city government.

According to Sybil, their theory is that the multiple ways the restaurant will be used will help them stay flexible with ways to make money.

Now open for business, the Tin Cup is available to the public Wednesday through Friday 3-9 p.m. and Saturday through Sunday 7 a.m. to 9 p.m. They serve Pepsi products and draught beer, but have not yet implemented wine.

For more information regarding the Tin Cup, visit their Facebook page at “Tin Cup” and look for the Valley Grande location.