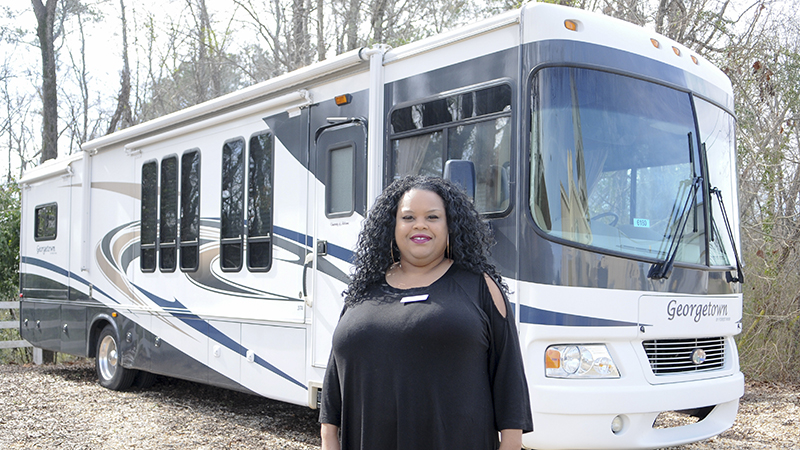 The Family Sunshine Center (FSC) headquarter in Montgomery is now able to examine and counsel sexual assault victims in Dallas, Perry and Wilcox counties without asking them to travel.

Janice Jones, a sexual assault counselor for the center, said the Lighthouse Counseling Center purchased an RV, which is located on Vaughan Regional Medical Center’s campus, for them to perform examinations and offer counseling.

“This has been a project for over a year, so they’ve been trying to get this … and now we finally have it,” Jones said Thursday.

The FSC partnered with Lighthouse, who purchased the RV for around $250,000.

In the past, Jones said victims in Dallas, Perry and Wilcox counties had to travel to Montgomery for examinations and counseling. As a result, she said some victims chose to not have an examination or to seek counseling. She said the emergency room at Vaughan Regional Medical Center performed the examinations at one time, and the FSC would provide counseling until the program ended.

Now, she’s hoping that won’t be an issue because victims will not have to travel all the way to Montgomery. The RV is located at Vaughan Regional Medical Center near the emergency room.

“A lot of people were shying away and not saying anything about it, so we decided we needed to do something that will bring it closer to them,” Jones said. “That’s what made the whole project.”

The RV will be staffed with a sexual assault counselor, an advocate and a SANE (Sexual Assault Nurse Examiner) to help the victim. Jones said the service is available 24 hours a day, seven days a week.

“To have an RV here where we can have the rape exam done, it’s so exciting because we won’t have to worry about losing a victim,” Jones said. “I feel like it’s a safe location. We’re next to the emergency room and won’t have to feel unsafe.”

Jones said services are already being offered in the RV. The RV also provides victims with a place to clean up.

Jones said victims can call the Sexual Assault Crisis hotline at (334) 213-1227 or herself at (334) 399-1451. She said the FSC is also always looking for donations of non-perishable food items and clothing for women, children and men of all sizes.