A 24-year-old Selma man has been convicted of a 2015 shooting that injured a paralyzed man.

According to Dallas County District Attorney Michael Jackson, Glentravious Olds was convicted Tuesday of second-degree assault in the Dec. 30, 2015, shooting of Eric Parnell. 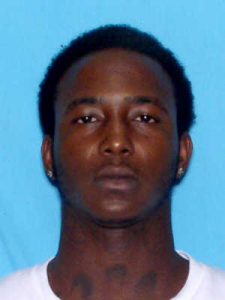 Glentravious Olds was convicted of shooting and injuring Eric Parnell in Decembr 2015.

The shooting was just one in a series of back and forth shootings that killed two and injured others during a two-day period.

Jackson said a Dallas County jury spent just over an hour deliberating before reaching the guilty verdict. Olds now awaits sentencing. Jackson said Circuit Judge Collins Pettaway has ordered a pre-sentence investigation and report, which is expected to be completed in a few months.

“Glentravious Olds and his crew ambushed the victim,” Jackson said.

“We are going to keep getting these gunslingers off the streets.”

Parnell, who is confined to a wheelchair after begin paralyzed due to being shot in 1996 and again in 2005, was shot in the back on the 2100 block of Church Street. Parnell was at his sister’s house watching movies with several family members and stepped outside to smoke a cigarette around 8:10 p.m., according to court documents.

Parnell told officers he saw three men standing in the street in front of the neighbor’s house.

He told authorities all three men started shooting at him. Parnell turned around in his automatic wheelchair to get away and was shot in the back of his left shoulder.

Parnell told investigators he did not know the shooters, but he recognized Olds and another suspect, Antonio Whatley.

Alfred Parnell, who was identified as Eric’s brother, Whatley, Clarence Brenson and Frederick Tucker were also arrested for their alleged involvement in the string of shootings.

The same day Eric was shot, a woman identified as Nikki Olds was shot in the arm.

The next day on New Year’s Ever, Mary Whatley, Antonio’s mother, was shot and killed around 3:30 p.m. while she was leaving her home on the 1600 block of Maple Street in Selmont.

In a previous Times-Journal report, investigators said they believe Stallworth was caught in the middle of a shootout between Alfred Parnell and Glentravious Olds.

A few days after the shootings, Olds turned himself in to police.

The other men involved in the series of shootings are still awaiting trial.