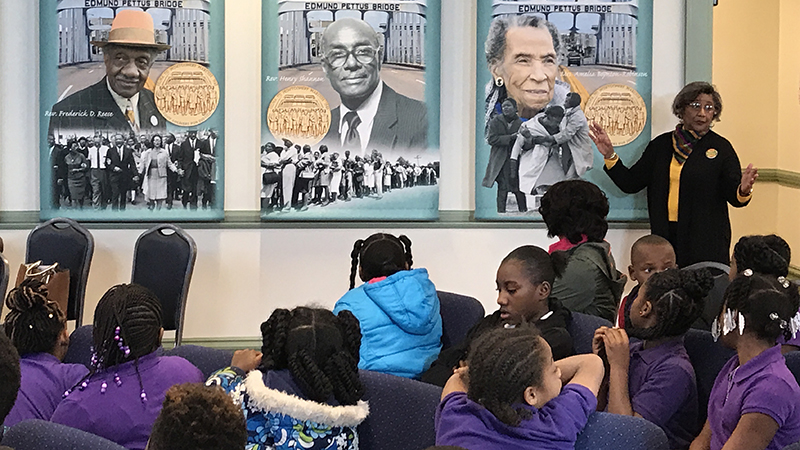 The Selma Interpretive Center, known for its commitment of keeping the history of the Civil Rights Movement alive, is hosting multiple lectures for local schools to come listen to two different speakers.

Occurring twice a week during the month of February, seven different Selma and Dallas County schools will attend the speeches with Dianne Harris speaking on Tuesdays and JoAnne Bland speaking on Wednesdays.

The first school to attend a speech was Clark Elementary School, who brought in a crowd of around 100 students to listen to the civil rights stories of Dianne Harris. Selma City Schools Superintendent Dr. Avis Williams was in attendance as well.

Harris has a long history in Selma, being raised here and participating in multiple voting rights movements. Joining marches and movements as early as 15, Harris is able to relate to her young audience on a personal level.

Although not old enough to vote, a young Harris became active in civil rights because many people of working age were restrained from participating.

This commitment overlapped into her studies, choosing to skip school on a couple occasions to partake in what she believed in. While her reasons were just, Harris was quick to emphasize the importance of school and that if you are going to skip, it “better be for an important cause.”

While she made sure to implement fun portions into the speech with songs and jokes, most of her presentation was committed to telling the young audience about voting rights and the “separate but equal” laws prominent during the Jim Crow Era.

Her stories included few times she got to listen to Martin Luther King speak, her experience being arrested by Dallas County Sheriff Jim Clark’s “possemen” and the training she received from civil rights leaders on how to protest nonviolently while also protecting yourself from violence.

Sheryl Smedley, executive director of the Selma Dallas County Chamber of Commerce and Tourism Information, emphasizes the importance of the upcoming generation understanding what happened in Selma during the civil rights movement.

“Listening to Harris gives them an opportunity to learn their own history from someone who was actually there,” Smedley said.

Harris, who will speak to schools on multiple occasions in February, wanted to set a positive tone for her first class. Before concluding the speech, Harris assured all students to be proud of their African heritage.

Additionally, the kids needed to understand the importance of political participation.

“Do not ever let anyone tell you that your vote does not matter” Harris said.

For more information on Dianne Harris, JoAnne Bland or the Selma Interpretive Center, call the interpretive center’s number at (334) 872-0509.