Lady Saints win on buzzer-beater in overtime, Harris gets win No. 399 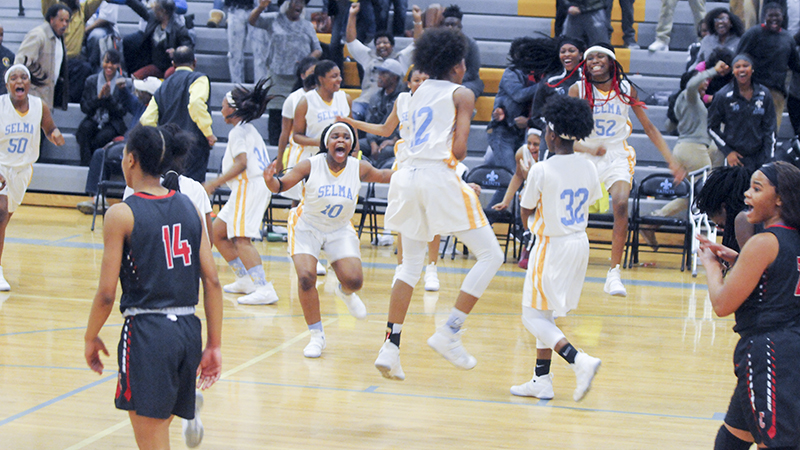 The Selma High Lady Saints survived regulation, and defeated the Central Tuscaloosa Lady Falcons 58-56 on a buzzer-beater layup by Kynadra Lewis in overtime on Friday night.

“We just had to keep fighting,” Lewis said. “I missed a lot of free throws, but I made it up.

As the seconds ticked away, even Lady Saints head coach Anthony Harris was worried that his team had run out of time.

“I think Lewis picked it up and laid it up,” Harris said. “I turned my head away because I thought the time was going to run out.”

The Lady Saints don’t often use a full court press, but Harris made the right decision down the stretch. The defensive adjustment forced the Lady Falcons to turn the ball over twice before crossing half-court that resulted in fast break layups by Lewis to tie the game.

“We knew it was going to be a test, and I wanted it to be a test,” Harris said. “Tonight, I think we did a hell of a job defensive-wise. It got a little tough for us, but we told them to never quit.”

In addition to pulling off the incredible win, the victory brings Harris one win closer to the 400-win mark in his 15 seasons with the Lady Saints program. His record now stands at 399-96 with one game remaining against Southside in the regular season.

The Saints got off to a slow start offensively, and trailed most of the game. The Lady Falcons had a height advantage in the post and made securing rebounds an issue early on.

In spite of the disadvantage, the Lady Saints never fell too far behind. In the first quarter, Selma trailed 14-8. At halftime, Central Tuscaloosa led 23-22.

The Lady Falcons had an impact point guard in Quintasia Leatherwood-Doss, who scored 20 points in the game. As Selma’s defense adjusted to her game, she began dumping off assists to her post players for easy layups.

However, big three-point shots from Selma’s Na’Quashia Smith prevented the Lady Falcons from extending their leads. Smith had 14 points in the game and made four 3-pointers in the game.

“She hit them at the right moment,” Harris said.

Lewis and Ta’Sharri Grimes did most of the damage against the Lady Falcons by putting up big numbers as well. Lewis scored a team-high 23 points, had six assists and five steals. Grimes earned a double-double with 17 points and 11 rebounds.

Rodericka Parker assisted Lewis on a fast break at the 4-minute mark to give the Lady Saints its first lead of the game at 44-43. The team traded baskets and exchanged leads throughout the fourth quarter.

The Lady Saints were down 48-46 with 15 seconds left in regulation. Lewis inbounded the ball to Grimes at the elbow and she made the jump shot over her defender to tie the game 48-48. The Lady Saints had a chance to win the game when Grimes deflected a pass on the next play, but the team wasn’t able to control the ball in time to get a shot off.

In overtime, the Lady Saints had to make another comeback attempt to stay in the game. Another 3-pointer from Smith kept the score tight after the Lady Falcons scored a quick two baskets out of the gate. The Lady Saints’ defense in the final minutes was strong enough to give Lewis her game-winner at the end.