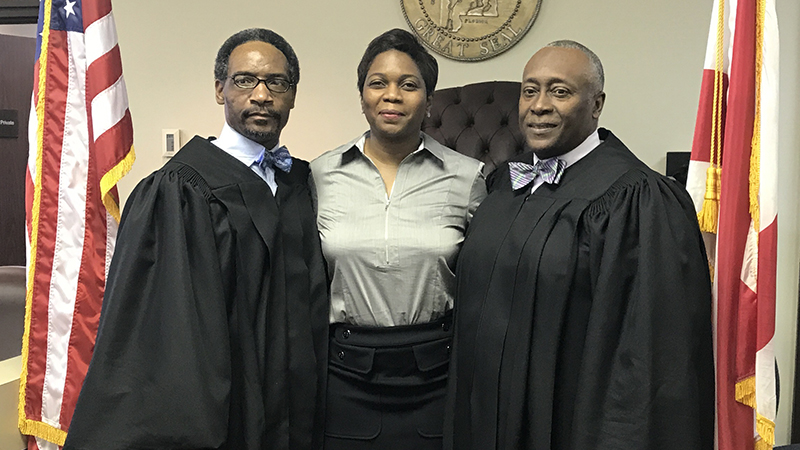 Christmas Green (middle) poses for a photo with Circuit Judge Marvin Wiggins and Circuit Judge Collins Pettaway Thursday after she was sworn in as circuit clerk. (Adam Dodson | Times-Journal)

In front of an over-capacity crowd of around 100 people, Selma attorney Christmas Green was sworn in as circuit clerk for Alabama’s 4th Judicial Circuit Thursday.

Green was publicly sworn into office from the courtroom of Judge Marvin Wiggins at the Dallas County Courthouse.

Selma residents, city officials, members of the Dallas County legal system and members of the surrounding court systems were all present for the swearing-in of a peer they will be working with on a daily basis.

The Fourth Judicial Circuit is the largest district in Alabama, totaling five counties. Circuit clerks and probate judges from a few of the other counties represented showed up to pledge their support to Green.

Fellow judges of the district, Judge Wiggins and Judge Robert Armstrong, expressed their elation with bringing on someone with legal experience such as Green, who has operated her law firm for over a decade.

Armstrong called her a “good lawyer and good person with a good heart.” Wiggins voiced much of the same.

“It is a special occasion here in Selma today,” Wiggins said. “We have been blessed with a beautiful and intellectual woman for the job.”

While the public ceremony took place Thursday, Feb. 1, she was privately sworn-in the day before. According to Green, she did this so she could officially start and be “baptized” in what her daily routine and responsibilities will be.

The public ceremony was in order for members of the community to get a good opportunity to meet their new clerk.

Although she enjoys her legal practice, Green emphasized her desire to blaze a new path.

“I told Marvin (Wiggins) that if he could find something new for me to do then to let me know,” Green said.

“I am blessed and this means so much to me. I appreciate all those who care about Dallas County and about the position of circuit clerk.”

Since Green has been able to hit the ground running, she already has laid out plans for her term.

Green wants to get a Dallas County Clerk’s Office website up and running, which she believes will increase the operational ability of the office significantly.

“The website would help with the traffic the office receives,” Green said.

She also expressed her desire to expand the department with student programs. This includes bringing on an intern from a criminal justice student from Concordia College and a senior in Selma High School’s co-op program.

In addition to her plans, she provided the public with her three goals of how she wants her office to run: with professionalism, efficiency and friendliness.

Since the goal of the public ceremony was for the community to get to know their circuit clerk better, Green explained some of the duties of the circuit clerk, calling it the “central processing unit” for legal operations.

“The clerk is the administrative arm of the court and the backbone of the legal system,” Green said. “It is not a glamorous job, but a tough job.”

Green fills the position for Cheryl Strong-Ratcliffe, who decided to step down and retire in late 2017.

Green will serve the remainder of her term. Primary elections for circuit clerk be in July while the general election will be in November.