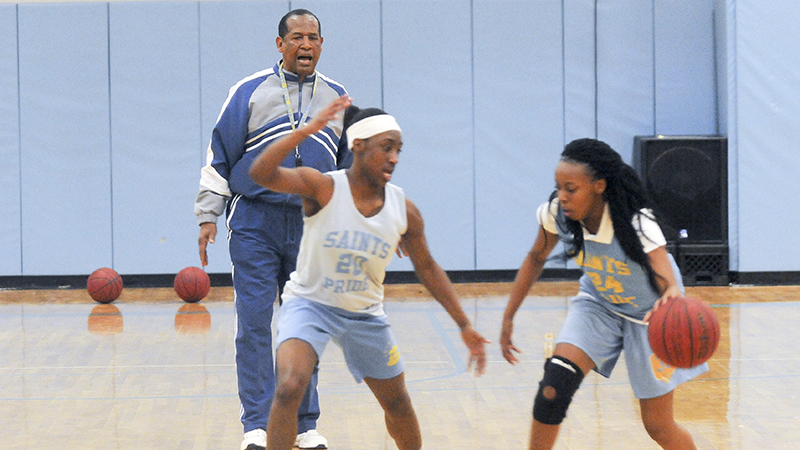 The Selma High Lady Saints 56-38 win over Demopolis this past Tuesday gave the program its 15th consecutive 20-plus win season.

Lady Saints head coach Anthony Harris has been leading the Saints for 17 seasons. His first stint was from 1987-1989 before he returned to coach the girls program in 2003.

Since his return, the Lady Saints haven’t lost more than 10 games in any season. The teams worst record in the past 15 seasons was in 2006 when they still finished 21-10 and won the region championship.

Even though the impressive streak speaks highly of Harris’ coaching ability, he prefers to credit the young women he’s coached through the years for reaching this milestone.

Harris said that the achievement is special because women’s sports doesn’t always get the attention or praise they deserve.

“When it comes down to womens sports, they don’t get the accolades that mens’ sports get,” he said. “Today, things have changed. It all goes out to the girls that made this happen for Selma High School, Selma City Schools and the city of Selma.”

The Lady Saints have been able to reach this milestone because the girls have done what Harris needed them to do to win. Like many other top athletic programs, Harris has cultivated a winning environment.

“Every last one of the girls that I’ve coached over the last 15 years have bought in to the program,” he said. “It’s been an honor and a pleasure to work with the young ladies at Selma city, and I want to thank all the parents that allowed me to work with them.”

Selma still has two regular season games left on the schedule this season, and Harris will have the opportunity to reach another milestone this year. He is two wins away from reaching 400 career wins with the program.

However, Harris is more focused on the area tournament than his personal accomplishments. The Lady Saints tied with Chilton County at the top of the area standings with a 3-1 record. Selma lost the coin toss and Chilton County will host the area as the top seed.

“We’re not going to make too many changes,” he said. “We’re going to go back to the fundamentals, and do the things that we do best.”

Ta’Sharri Grimes, Kynadra Lewis and Rodreckia Parker have been the primary scorers for the Lady Saints this year, and they will play a big part in how far the team will go this season.