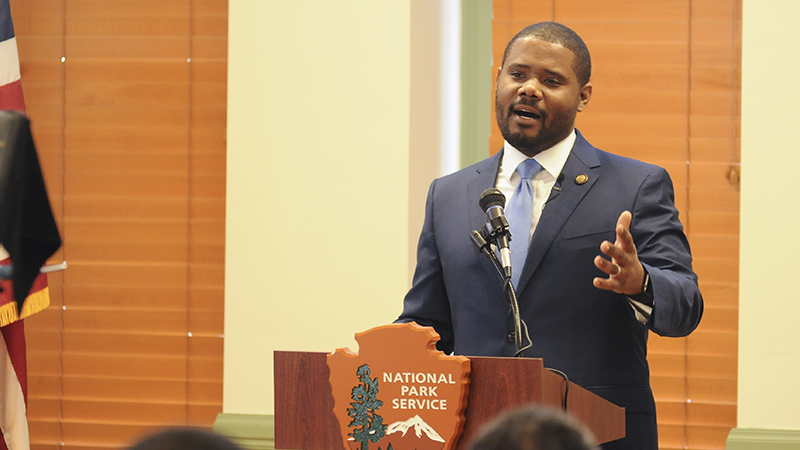 Mayor Darrio Melton is looking toward the future of the city after giving his “State of the City Address” Monday morning at the Selma Interpretive Center.

With a room packed full of business, community and faith leaders, as well as many youth, Melton discussed the city’s many challenges and successes during his first year in office.

Melton said among the issues the city faces are unity, politics and finding common ground to help push the city forward. There are also issues of crime and violence, as well as an aging infrastructure.

“We have been elected as elected officials not to maintain business as usual but to challenge the status quo and to move the Queen City forward into a brighter, stronger and vibrant future,” he said. “We cannot afford to sit idly by as leaders and allow the politics of division to hinder us or stop our progress. It is time that we together take a stand when it comes to tough issues and make bold and unwavering decisions. It is the time to do that.”

Melton said the city is also making an effort to combat arson after a rash of fires in 2017. He said firemen have been enrolled in the police academy to give the fire department its own fire investigators.

Melton made note of several cave-ins in 2017, including one on Crescent Hill Drive and two along the riverfront. He also discussed issues with the city’s streets, which are littered with potholes.

“Far too long we’ve had government play political football when it comes to repairing the streets and the sidewalks in our city. Year after year, decade after decade, instead of us fixing the issues, we have punted the football, and no pun intended, down the street,” Melton said.

“I believe you should be able to travel up, down and through the streets and avenues of Selma without playing hopscotch with potholes.”

Melton proposed two ways to fix the city’s streets. One is by asking city council members to combine oil lease funds for each individual ward instead of putting the money toward individual projects.

“Let us together pool those revenue resources to repair the streets in our city,” Melton said.

“With the oil lease funds we will receive this spring, I am asking members of the city council to vote to use those funds to repair North Broad Street and Franklin Avenue.”

He also asked them to commit to using them for additional street repairs in the future. Melton’s second proposal is passing a fuel tax that would be earmarked for street and sidewalk repairs.

Melton said the city is also dedicated to developing the riverfront and bringing in more commercial and retail developments.

Melton said the city is also working on permanent raises for employees rather than the yearly one-time raises employees have been receiving.

The successes Melton listed for his first year were the completion of a comprehensive LED lighting plan throughout the city in a partnership with Alabama Power, the Alabama Department of Transportation’s repaving of Broad Street and Highland Avenue, a $4.3 million sewer project and a $500,000 storm drain project.

As for the future, Melton said the city will soon see a $12 million housing development in the Lincoln Heights area. He said he is also in talks with the Alabama School of Math and Science about bringing a campus to Selma.

Melton said within the next couple of months, there will be a $1.3 million project on Boynton Street and Summerfield Road.