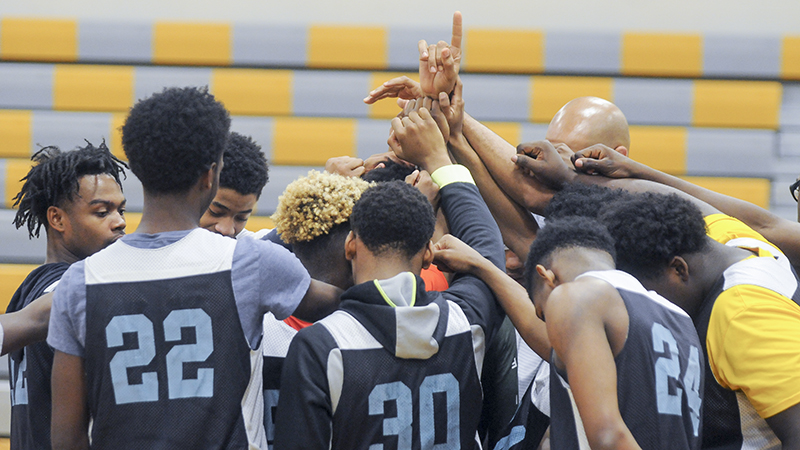 The Class 6A Area5 regular season champion Selma High Saints huddle together after a light practice on Wednesday afternoon. The Saints were 3-1 in the area, and will host the area tournament at Selma High.

“It was a big game for us from the standpoint of what we went through last year,” Saints head coach Ronald Lane said.

This year, however, the Saints stand alone atop the area standings with a 3-1 record and will get to host the area tournament.

“This time we know we’ll be at home,” Lane said. “We can host the area tournament. Get a first-round bye and get one of our opponents out of the area that we’ve played before. That was a big step for us, our seniors and our program.”

Lane’s goal since the start of the season has been to return Selma High basketball back to its former glory, and he said this was an important first step.

“The area championship is like the first stepping stone,” Lane said. “Now that we’ve got a chance to repeat as area tournament champions, that next step is the regionals. Once you get to regionals, it’s down to a four-game season and anything can happen at that time.”

The Saints have been battle tested on the road this season, and Lane believes that the difficult schedule has his team prepared for the tournament run. Through the course of the season, the boys chemistry together has helped improve their play on the court.

“At this time of the year, when it’s championship time for the area, regional and stuff like that, our kids shouldn’t shrink when it comes to competition,” Lane said. “I think everybody is starting to buy in now and starting to understand the team concepts. The team chemistry and family atmosphere is what’s going to get you over the hump when it comes to playing in big games and doing things in crucial times to help you win.”

Seniors James Anderson, Gernard Brown and Korbyn Kelly all point to the team’s chemistry as the main reason the Saints were able to take control of the area.

“We progressed by listening to coach [Lane] and being more disciplined,” Anderson said. “Our chemistry is building up and we’re playing with more teamwork.”

Lane speaks highly of his seniors and the leadership roles they’ve taken on to help this team. They have set the tone and the rest of the players have responded.

“These guys understand that this is their last go-round,” Lane said. “These kids play with a lot of pride. They’ve always been winners… They know they have to play at a high level to achieve the goals that they want to achieve.”

The seniors and their coach are on the same page. They realize the opportunity that they have in front of them.

“It feels good to know that we can come out with something special for our senior year,” Brown said. “We’ll have something to remember when we look back at our basketball career.”

The team still has games left against R.C. Hatch, Dallas County, Demopolis and Central Tuscaloosa before the area tournament, but they’ve already got the wins that counted most out of the way. Once the regular season ends, Chilton County and Stanhope Elmore will have to face each other again to determine who will face the Saints for the area tournament championship.

“It’s really big for us now to be comfortable at home and have home-court advantage,” Lane said. “We’re hoping the community can get behind us. We’re just asking the community to come out, see our ball games and just support us anyway that they can.” 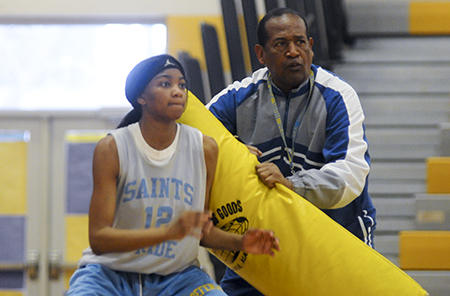 Selma High junior Ta’Sharri Grimes works on her post game in practice with Lady Saints head coach Anthony Harris on Wednesday. The Lady Saints are 3-1 in area games, but have to wait for the outcome of Chilton County versus Stanhope Elmore to see who will be area champ.

The Lady Saints also have a 3-1 record in the area, but they are awaiting the outcome of one last game between Chilton County and Stanhope Elmore to determine if they will be the outright area winners or tied with Chilton County.

According to Lady Saints head coach Anthony Harris, his team will have won the area if Chilton County loses to Stanhope.

Should they beat Stanhope, then there will be a two-way tie for first place and a coin toss would determine which school would host the girls area tournament.