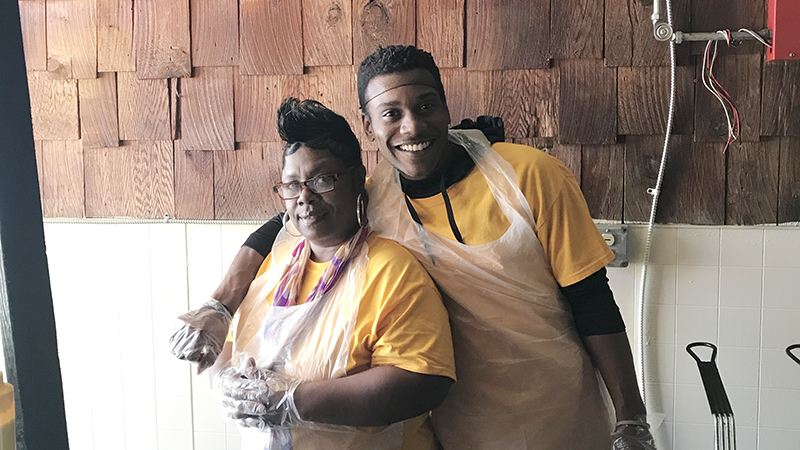 Kendra Martin and her nephew are shown at their new restaurant Phat Phillies and Fries on Alabama Avenue in Selma.

Local Philly-Steak restaurant, Phat Phillies & Fries, is now open for all customers in Selma. Located at 1205 Alabama Ave., Phat Phillies attempts to bring a new style of food to Selma while also hosting a family atmosphere.

Phat Phillies received its start when owner and Selma native Kendra Martin wanted to put her passion for cooking into a business. Less than two months after finding the right building and springing into action, the restaurant was up to code and ready to serve customers.

Martin used to live in Buffalo, where her two favorite restaurants were Scottie’s Steakhouse and Louie’s Texas Red Hots, a hotdog venue. These two restaurants served as the inspiration for Martin’s own restaurant idea.

“The food there stuck with me,” Martin said. “I wanted to bring a new flavor to Selma. I brought my New York style back down here.”

Also included in their array of meals is a secret sauce that is signature to Phat Phillies. According to Martin, no one else has this sauce or knows what it is.

Phat Phillies employs a team of Martin’s trusted family members, including her cousin, nephew and brother. For marketing, they have relied on direct mail, flyers, social media and word of mouth. They have catered their product for church events and fundraisers to let the community test out the food. According to Martin, they sell out every time.

After going through the inspections, marketing her product and eventually opening the restaurant, Martin can focus on her love of making good food people can enjoy. After leaving the north, she says there is no better place to do it than back down south.