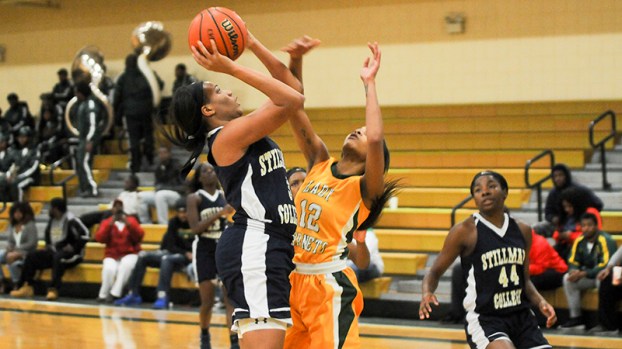 Selma native and Stillman College guard Ki’Onna Likely scores during a 70-59 win over Concordia College on Thursday night. Likely scored 30 points to set a career-high in points and field goals made (13).

Not only did they win, but their senior guard and Selma native Ki’Onna Likely led the team in scoring with 30 points.

The Southside High School alumna made 13 field goals and was 50 percent from the free throw line in eight attempts.

She set a career-high in points and field goals made. Stillman’s second and third scoring leaders against Concordia each only got nine points.

“She’s been playing great all year,” Stillman College women’s head coach Alico Dunk said. “She’s been carrying us. She keeps her composure. She does a good job getting us buckets late when we need it, and that’s what a senior does.”

Likely isn’t much of a jump shooter, but she works hard in the paint to take advantage of offensive rebounds and openings in the post.

She also shoots free throws from the far-left side of the free throw line instead of directly in front of the basket, but the ball goes in.

“My role is to rebound and attack the basket,” she said. “Everybody knows I don’t shoot to well, so I attack the basket. I knew today they were going to make me shoot, so I went to the gym and worked on my jump shot. Tonight, it was falling.”

After every big score, or contested layup that goes in, Likely lets out a “BOO!!!” chant that is echoed by her teammates and Stillman fans.

Her efficiency inside is why she’s Stillman College’s top scorer this season averaging 13.3 points per game. The team’s second leading scorer was out of the lineup with the flu, so Likely filled in the points for her.

“Our second leading scorer is out with the flu, so I knew I had to come in and be a great leader,” Likely said. “Be a great rebounder, go after the 50-50 balls and lead my team to victory.”

Playing in her hometown means a lot to Likely. She knows that she has a lot of people from Selma still supporting her.

“At Concordia, it’s just the atmosphere,” she said. “I’ve been playing them for four years. My JUCO year, I could never beat them. When I came to Stillman, I had a little more help.”

Turner came to support his former player since the Lady Patriots game on Thursday night was cancelled.

Likely showed out in her return to Selma this season, and was happy to escape with a win over the Hornets.

Regular season high school basketball is winding down, and tournament play is on the horizon. The final few games of... read more