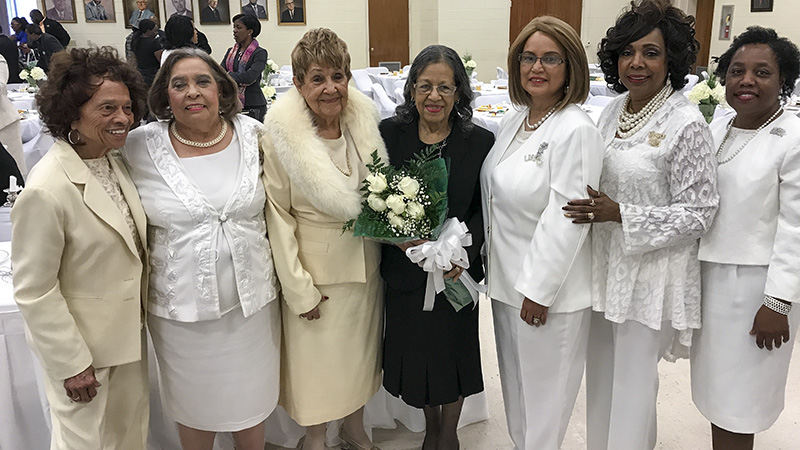 Over 350 Selmians gathered in recognition and celebration of the civil rights activist’s accomplishments.

Getting its start back in 1992, the Unity Breakfast was also celebrating its 25-year anniversary.

Williams has a history of promoting unity throughout her educational career, which includes stints in Huntsville and Tuscaloosa. Introduced by the Links, Williams opened up her speech with a haiku.

We are bold, strong, loved and more

The breakfast this year came with its own new additions, such as a jazz band providing music throughout. They handed out three citizen of the year awards and also doubled their scholarships that go to local students from three to six.

Winners of citizen of the year include as follows:
Colonel Otis C. Jones

Jones has a distinguished military career. His wife, Natasha, and kids were there to accept the award with him.

“Do not accept mediocrity,” said Jones. “If you dream big, you can go where you want to go, be who you want to be and do what you want to do.”
Reverend James Perkins

Perkins is the former mayor of Selma and pastor of Ebenezer Missionary Baptist Church. Perkins was not present to accept the award.
Caleb Smith

Smith is a sixth grade student at The School for Discovery. He recently received a grant from Disney to start the Selma Recycles program. With the aid of his family, he educates residents on different types of plastic, collects plastic throughout the city and transports the material to a recycling company in Montgomery.

“I would like to thank the Links, my mom and dad, my volunteers and the citizens of Selma,” Smith said. “Anyone can help the community. You just need a heart full of grace.”
Next, the Links gave out their six scholarships to local students. Students who won scholarships are as follows:
STEM Scholarship

The links use this candle to emphasize the messages of Dr. King, who is known as “the great unifier.”

To light the candles, community leaders from different aspects of Selma were asked to come forward to light one candle.

The Links asked pastor Daniel Martin to represent the spirit candle. Representing the city, Mayor Darrio Melton was asked to light another. For the field of education, Dr. Avis Williams was asked to light a candle. Lastly, Caleb Smith and his mother, Crystal, lit another candle.

The ceremony was one to remember for Selma residents.

State Rep. Prince Chestnut believes events like this can have a lasting impact to those involved.

“This is always a good event because it brings people together in unity at the earliest in the morning,” Chestnut said. “People don’t care how much you know until they know how much you care. I think this breakfast shows that a lot of people in this community do care.”

To close the program, “United We Stand” was performed by members of Selma High School.