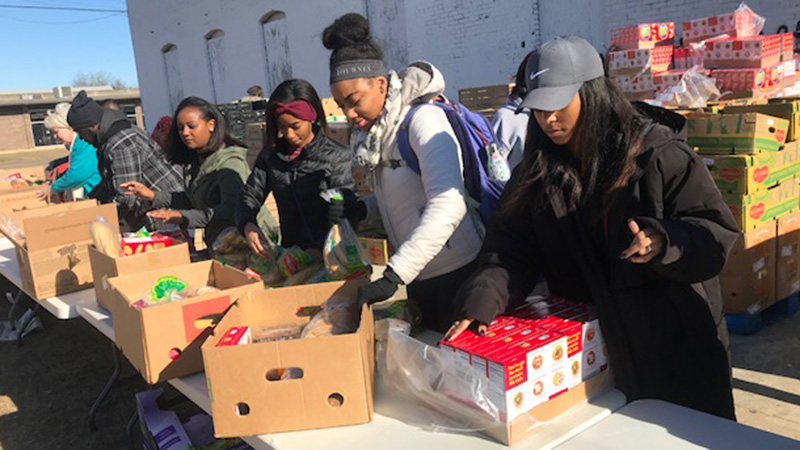 Students from Auburn University spent MLK Day volunteering in Selma, including at a mobile food pantry on Water Avenue.

A group of college students from Auburn University could have spent their Martin Luther King Jr. holiday catching up on sleep, studying or anything else, but instead they spent the day in Selma volunteering.

“To honor and commemorate Dr. King, we wanted to come to Selma to volunteer with a lot of great organizations,” Bayer wrote. “This is actually our second doing it, and it was really awesome last year, and so far, it’s been a great day making in impact in Selma’s community.”

Around 60 students made the trip to Selma to help the Selma Food Bank, SABRA Sanctuary, Edmundite Missions, and Dave Fulford with volunteer housing.

“I think fun trips are great, but it’s so important to get with other likeminded students and serve,” Bayer said.

This was the second trip to Selma for Blake Roller, a graduate student at Auburn.

“I, of course, have seen the film Selma and learned all about the march to Montgomery. I really think that’s a historical part in America’s history, and I really wanted to come here to give back to that city and to be able to see it for myself,” Roller said.

Roller said he spent the day helping paint a house that is used for volunteers.

“We spent the whole day painting about four different rooms, a dining room and a hallway,” Roller said. “Those housing areas will be used for students from New York, California, Alabama and several other states.”

Jeff Harrison, executive director for the Selma Area Food Bank, said a group of the students helped set up a mobile food pantry with the food bank and blue Jean Church on Water Avenue. The students helped unload a truck that was filled with around 12,000 pounds of food, sort the food and distribute it.

“It’s a great way to showcase Selma because a majority of the students that come here aren’t from here, and they’ve never been here before,” Harrison said. “It’s our opportunity to let them see a side of Selma that not all of them get to see or hear about. They get to see what Selma is truly about, especially on a day like today.”

After finishing up their volunteer work for the day, the students gathered at the Selma Interpretive Center and made the walk across the Edmund Pettus Bridge.