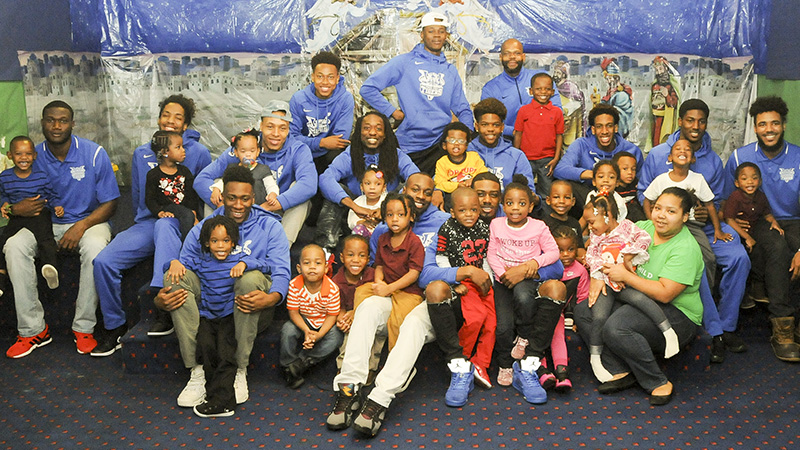 The students at the McRae-Gaines Learning Center, located on 2601 Marie Foster Street, got a surprise visit from the Voorhees College men’s basketball team Friday morning.

The team from Denmark, South Carolina, stopped by the school for a few hours to read, play and engage with the children for their first community service outing as a team.

Selma native and head coach of the program Derrick Mitchell decided to use the team’s road trip through Alabama as both a homecoming trip and a learning opportunity for his players.

“It’s always good to come home to Selma,” Mitchell said. “I wanted my young men to do their community service here.”

The team arrived in Selma around midnight Friday morning after a loss to Stillman College the night before. Mitchell used the travel day to introduce his team to his grandmother Sadie Moss, who is also the director of MGLC.

“It just means more,” Mitchell said. “For me, I know the impact that it has for my grandmother to see what she raised and what it has become.”

The team split-up into groups at MGLC to interact with the different students who were excited to see them.

The players rotated between playing in the baby room, reading to Mrs. Barbara Harris’ pre-k class and building blocks with kids in the auditorium.

“It was important to have them come and serve the children because I wanted our children to see what they could grow up to be,” Moss said. “To have [the team] do public service at my school was a joy.”

Mitchell wanted his team to see everyone and focus on making the kids day better.

“I spoke to them before we got off the bus,” he said. “Let’s try to forget ourselves today. When we go in here, let’s worry about who we can help and who we can impact. This really meant a ton to me, especially being my mother’s school, to give back.”

The students at MGLC range from 12-month old babies to second graders.

According to Ashton Pierce, a junior from Hattiesburg, Miss., the kids were shy at first, but warmed up to the team pretty quickly.

“Once you got around them and started playing with them, they got really comfortable,” he said. “That was nice to see, because they showed me that I was doing my job.”

Senior guard Demitres “DJ” Evans from Atlanta, Ga., made an easy connection with a student when they noticed each other’s shoes.

“One little dude named Marcus,” Evans said. “He had some Jordans on. He looked at my Jordans, and we just talked about each other’s shoes. That was something in common me and him had.”

Andrew Roker, a sophomore from Freeport, Bahamas, was experiencing his first trip to Selma and his first time doing community service in a school.

“It’s a good experience,” he said. “I usually do basketball camps, but I’ve never just come to a school and read to the children.”

Mrs. Harris, the pre-kindergarten teacher who recently won the Shining Star Award from the Alabama Department of Education Office of School Readiness, could tell that her students were excited to have basketball players as visitors.

“[The students] were really excited to see these visitors, because they were Mrs. Moss’ grandson’s basketball team.” she said. “They’ve been a gem to the children. They read stories and interacted with them during center time.”

The time with each other and with the students at MGLC also served as a team bonding experience for the Voorhees College Tigers.

According to Pierce, the team is always together and activities like this makes them a stronger unit.

“That’s what has gotten us to where we are right now as a brotherhood,” he said. “For us to come here as a team just builds our chemistry.”

Mitchell wanted to make the most of the trip to Selma, and it was important for him to share the history of the city with his players as well. He said that most of his team has never been to Selma, and they need to know importance of where they were. They’ve heard of the Edmund Pettus Bridge, but Mitchell wanted to provide them a comprehensive understanding of Selma’s history.

He arranged a tour for them to see and learn more about the city.

After the game against Concordia Saturday afternoon, the Tigers will be treated to a send-off feast from Mitchell’s family before heading back to campus in South Carolina