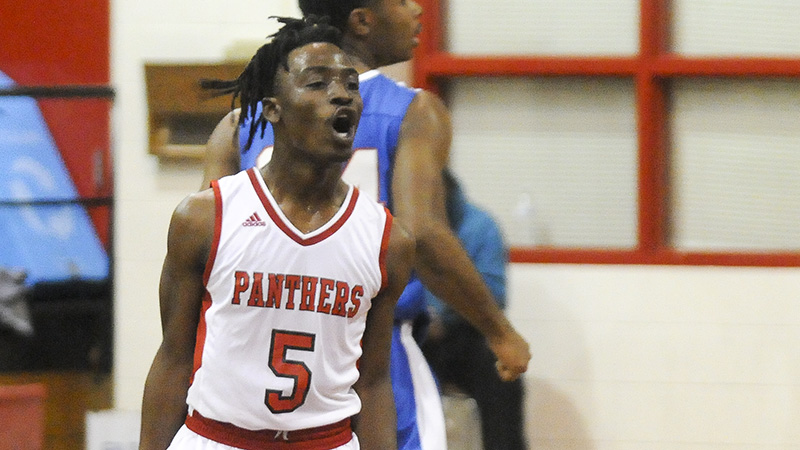 Southside guard Devion Moore pumps up the crowd in Friday night’s 54-51 win over Wilcox Central. Moore had six points in the game.

The Lady Panthers were without their head coach Rand Smith, who was out sick with the flu. Christina Watts, one of their top scoring options, wasn’t in the lineup due to an injury.

“We were just playing for coach Smith,” Brown said. “We had a game plan and went with it.”

Even though they were short-handed, the girls started off strong against Wilcox.

In the first half, the Lady Panthers defense kept Wilcox in check. They only allowed five points in each of the first two quarters.

Southside guard Kiara Harrell provided some separation in the score with a 3-pointer in both the first and second quarters.

Since Watts wasn’t on the floor, the scoring responsibility was placed on Kylan Brown and she delivered. Brown had 18 points in the game. She also was active on the boards and blocked a few shots as well.

“[Kylan] stepped up and had a big game,” Brown said. “She had some turnovers down the stretch that were crucial, but overall she played a pretty good game.”

The Lady Panthers had the lead up until the 5:20 mark in the third quarter when Wilcox hit a 3-pointer to tie the game at 17-17.

Southside started showing signs of fatigue as the third quarter went on.

The girls started turning the ball over on inbound plays and had difficulty breaking through Wilcox’s trap defense. Wilcox took advantage of the turnovers and turned them into easy layups that helped them score 18 points in the third quarter.

The Lady Panthers were only trailing 28-24 when the fourth quarter started, but the ball security issues persisted. Wilcox outscored the Lady Panthers 13-5 in the final quarter.

The boys team was in a dog-fight all night long with Wilcox.

The team trailed early, but played a great defensive game that was key to their win.

“It was a team effort on defense,” boys head coach Lenord Jones said. “We really wanted this one tonight. I was impressed with how they played together as a team.”

The Wilcox boys team had the athleticism to matchup with the Panthers. They made big blocks, rebounded at the rim and even threw down a dunk that got a reaction from fans in both bleachers.

But the noise didn’t matter.

At the end of the first quarter, Wilcox had a 16-12 lead over Southside. The Panthers answered in the second quarter by putting up 15 points.

In the last few minutes of the game, Derrick Griffin fouled out. He scored 10 points in the ball game.

At that point, the Panthers only had a slim lead and only needed to stall to fend off Wilcox. As time wound down, Wilcox made a late push to challenge the Panthers lead.

With 7.8 seconds left on the clock, Keshawn Arrington’s two free throws were the nail in the coffin for Wilcox.