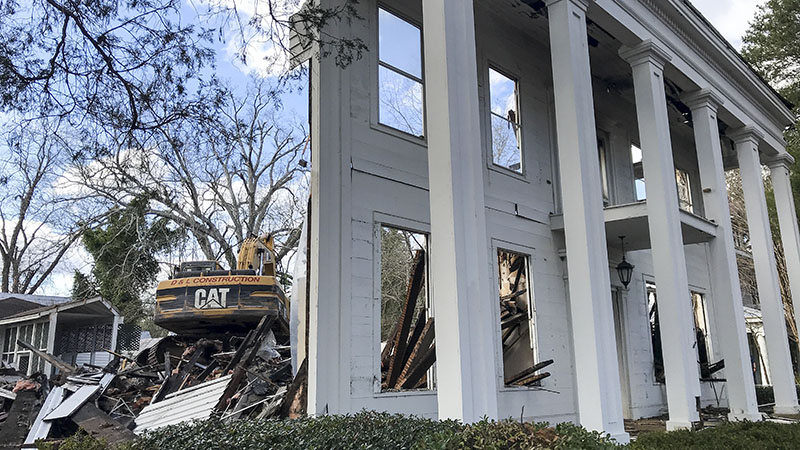 The historic Lee-Bender-Butler home, which was built around 1850, was demolished Thursday. It was burned during a fire back in November that started in the attic.

The historic Lee-Bender-Butler house, built around 1850, was torn down Thursday as the result of a fire that occurred in November.

Former owner Roger Butler, who renovated the home 35 years ago, reminisced on the beauty of the house and the draw it had on the community.

Butler and his wife Dolly dedicated much effort to restoring the six-column house in 1982.

“I really was proud of the house,” Butler said. “There was so much space and people would walk by and admire it.”

The Greek revival style house was one of the oldest in Selma, as it was built circa 1850. The builder and then-occupant of the home was Thomas Helm Lee.

Lee is most famous for also constructing Sturdivant Hall and the 1857 Church Street Methodist Church.

Lee and his family occupied the house until his death in 1857. The house was sold in 1866 to H.H. Bender. Bender’s daughter, Annie, became the occupant of the house after his death.

Annie used the house to teach piano lessons to local Selma residents. After Annie’s death in 1947, she left $2,000 to each of her nieces but not the house.

She also wanted to leave something for her friend, Mary Butler, who is the grand-aunt of Roger. According to Dolly, Mary did not want Annie to leave her something she “had to keep up with.” Annie left Mary the house in her name instead.

Once Mary and the Butlers took over as residents of the house, she sold the house to Roger’s grandfather. He turned the house into a six-apartment complex. Upon his death, Roger inherited 1/8 of the house and bought the other 7/8 in 1980.

Two years later, Roger and Dolly began restoration of the house. With the help of a hired architect, they upgraded the windows, added an additional staircase, built a garage and improved the “deplorable” hard-wood floors.

“On occasion, Dolly acted as contractor,” Roger said. “She had the ideas, knew what we needed and found it.”

As tenants continued to leave the apartments, the Butlers took back five units, leaving one apartment to help pay for expenses.

Also present in the house were original paintings that hung from the old Wilby Theater, a business that Roger’s father owned.

After restoring the house and living there for many years, they sold the house to Jeffrey Estrada in 2008.