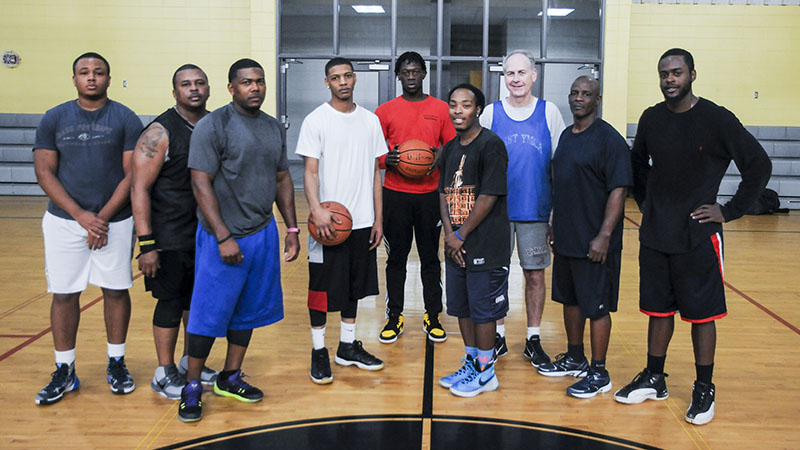 The YMCA Lunch Bunch plays basketball three days a week at the YMCA of Selma and Dallas County. The lunch bunch traces its roots back more than 45 years.

Selma is a basketball city in the heart of football country. The crowds that show up to the local high school rivalry games between Keith, Southside, Dallas County and Selma High are proof enough that the people of Selma have a passion for basketball.

But outside the high school gyms, there are only two other indoor courts in the city that are open for ball players. The Selma Police Athletic League has their gym located on 145 College Drive, but it’s primarily for younger children who want to hoop and receive mentoring after school or during the summer break.

The only other option is at the YMCA of Selma–Dallas County, and that is where a group of ball players meet year-round from noon- 3 p.m. every Monday, Wednesday and Friday to play pick-up games.

They are the Lunch Bunch.

The Y is a microcosm of the local community, and the Lunch Bunch reflects the diversity of Selma. On any given hoop day, 15-20 ballers from high school age to seasoned career professionals will show up to play together.

The Lunch Bunch has been a staple in the Selma community for more than 45 years according to John Calame, baller emeritus of the group.

“It started probably in the 1970s at the old Grist facility downtown, and then it carried over here when we moved to this facility,” Calame said. “It started as a bunch of business guys and college aged kids coming in and just playing at lunch three days a week.”

At 63, Calame still runs full-court games with the younger players. Everyone knows who he is and not just because he is one of the few white men who shows up to play.

It’s not a surprise that he can still play. Calame played high school ball at Selma High from 1969-71 under head coach Roy Wilson. He started playing with the Lunch Bunch in 1974 when he was a college student himself.

He has built quite a reputation for himself with the Lunch Bunch. According to 22-year old B.J. Leshore, Calame is still one of the better shooters on the floor.

Leshore has been balling with the Lunch Bunch for five years. He was a member of the 2014 Dallas County state championship basketball team coached by Willie Moore.

He said that he first joined the Lunch Bunch because he loved basketball, and there wasn’t anywhere else in town where he could continue to play.

“I just love basketball, and in Selma there ain’t no gym for real aside from the schools,” Leshore said. “This was really the only place we have, so of course you’re going to know about [Lunch Bunch] if you love basketball.”

The appeal to basketball lovers is evident in the variety of people who show up to play.

“You’re looking at all different types of people,” Leshore said. “Different races and all.”

As fun as the melting pot basketball meetup is, there is still a high level of competition among the players.

“It gets competitive over here,” Leshore said. “It’s just basketball. Nobody wants to lose. Everybody is being aggressive and trying to win, but it’s all love.”

Not only do former basketball players show up, but every now and then players return from their college teams for a quick run at the Y.

“I’ve been doing it for about three years now,” Underwood said. “Just come out to have fun, work on my game a little bit.”

Even though they argue over calls and someone always seems to have a different count of the score, the players have established a respectable relationship with one another.

They laugh and joke around during the pre-game shoot around. They bark at each other the closer it gets to game point. But then it’s all good again once the games are over.

“Everybody out here stays pretty friendly with each other,” Calame said. “Everybody gets along out here, and I think that’s the best thing about it. Everybody finds that they can get along playing basketball even if they have disagreements.”