Georgia and Alabama arrive in Atlanta, home away from home 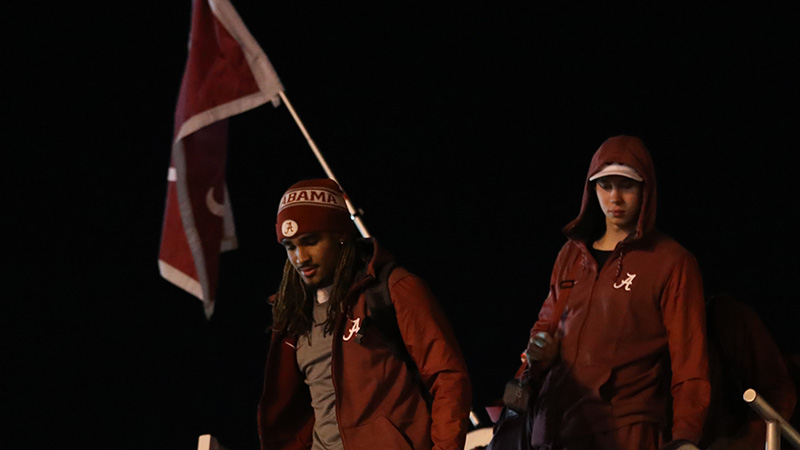 A week after defeating the reigning national champion Clemson Tigers in the Sugar Bowl, the Crimson Tide arrived in Atlanta, Ga on Friday night to face the Georgia Bulldogs in the National Championship.

The bus ride for No. 3 Georgia was about 75 minutes from its campus in Athens to the capital city. No. 4 Alabama spent less time than that in the air, flying from Tuscaloosa to what has become something of a home away from home for the Crimson Tide.

The Bulldogs and Tide made triumphant returns to Atlanta on Friday, both looking for their second victories of the season at Mercedes-Benz Stadium. The Southeastern Conference rivals play for the College Football Playoff national championship on Monday night.

Between the proximity of the schools and Georgia’s long national championship drought, the title game is looking like a tough ticket. The cheapest ones on the resale website StubHub as of Friday night were going for $1,400 each. The Bulldogs have not won a championship since 1980.

The last visit to Atlanta was a little more than a month ago for the Bulldogs. Georgia won the SEC championship game, avenging a loss to Auburn and wrapping up a playoff spot. The last time Alabama played here was the start of the 2017 season. The Tide beat Florida State in a much-anticipated opener of preseason No. 1 (Alabama) vs. No. 3 (Florida State). Only the Tide lived up to its hype — as usual.

Alabama is making its third straight appearance in the four-year old College Football Playoff national championship game. The Crimson Tide has won four national titles since 2009 under coach Nick Saban. Georgia has not been this close to a national title since the great Herschel Walker played his last game for the Bulldogs in the 1983 Sugar Bowl against Penn State. Georgia, which beat Notre Dame in the Sugar Bowl to win the ‘80 title, lost to the Nittany Lions in ‘83.

Atlanta has been hosting the SEC championship game since 1994. Alabama has played in it nine times since then, Georgia six. But the city has never hosted a game that decided the national championship.

Both teams got the red carpet treatment upon arrival Friday. The Bulldogs were greeted at the team hotel by a few dozen fans.

Alabama flew into Hartsfield-Jackson International Airport, welcomed on a 30-degree night by a drumline and a few fans waving pompoms. Five buses with Alabama logos and National Championship decals whisked Saban and the players to their downtown hotel.