ROLL ON BY: Riverboat replica comes through Selma 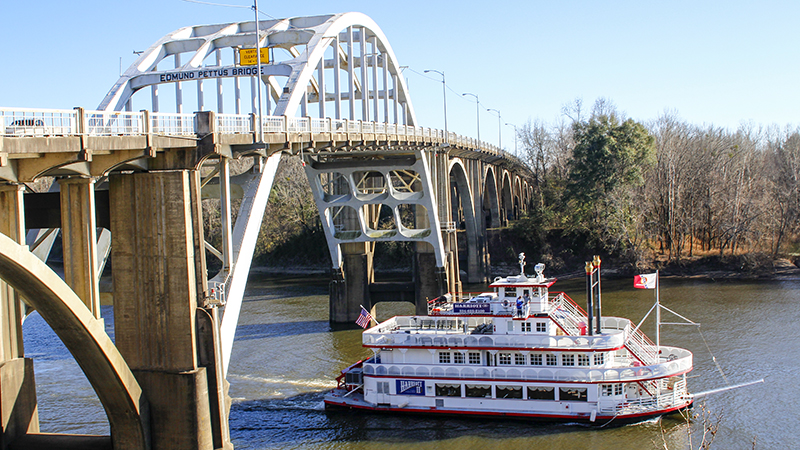 Montgomery’s riverboat The Harriott II made its way through Selma on Thursday afternoon heading to Mobile for regular maintenance and inspection.

A popular Montgomery attraction cruised its way through Selma along the Alabama River on Thursday afternoon.

Owned by the city of Montgomery, The Harriott II is a replica of a 19th-century riverboat that provides tours and also hosts large events on board. It is usually docked on Montgomery’s Riverwalk and travels from the capital city to Millbrook.

However, a much longer trek was in store this week.

Every five years, the 300-person vessel travels to Mobile for mandatory maintenance checks known as a “dry dock.”

This process requires the entire boat be taken out of the water so the hull can be inspected. Once the boat is deemed in quality condition, the Alabama Coast Guard certifies it with their approval.

According to Captain Jim Kittrell, it takes six to seven days to go down to Mobile and around another 10 days to come back up to Montgomery. He cites water currents as part of the reason for the difference in time length.

Kittrell has been steering the Harriott II for 8 years and even sat at the helm when the boat was part of another city going by a different name: the Savannah River Queen of Savannah, Georgia.

Although the crew’s time in Selma was spent passing through on the Alabama River, Kittrell said that he was impressed with the scenery around the river.

“The waterfront in Selma is just amazing,” Kittrell said

It was beautiful, especially right around the bridge.”

Events planned by the Harriott II include party cruises, anniversary cruises, weddings and seasonal events such as the Fourth of July cruise, Halloween cruise and New Year’s Eve Cruise.

Kittrell says he has seen just about everything that could happen on the boat, including multiple engagements and a funeral where the deceased’s ashes were spread over the water.

For more information regarding the Harriott II, visit their page on funinmontgomery.com.

Home is total loss after fire