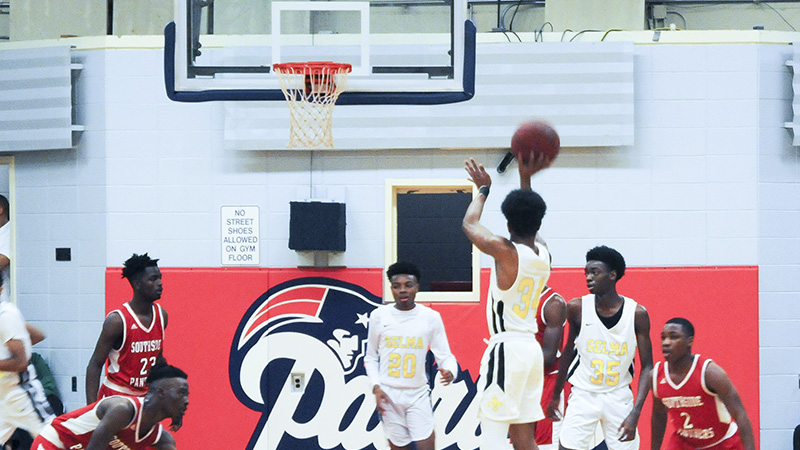 Entering the new year is met with celebrations and hopes to achieve or complete the various new year’s resolutions.

However, the local basketball teams are already halfway through their schedules, and only have a handful of games left to achieve their goals for the 2017-18 basketball season.

In January, the bulk of the area games are huddled together on each team’s schedule. Taking care of area games leads to favorable seeding in the area tournament, which is a big step for teams aiming to make deep playoff runs.

Even though it’s the middle of the season, New Year’s resolutions can still be made to help teams take advantage of their final slate of games.

Selma High is 6-11 on the season and 0-1 in area games. Despite their 74-65 loss to Chilton County earlier this season, the Saints still have three more area games on the schedule.

Selma head coach Ronald Lane said that the first half of the season was setup to prepare them for the tougher competition in the meaningful games down the stretch.

“This is why we schedule what we schedule for November through December,” he said. “Our early season schedule was predicated on playing really tough competition to get our kids into some adverse situations and play against some high caliber teams.”

The Saints have senior leaders on the court in guards Korbyn Kelly and James Anderson that have experience in tough games. Lane has stressed to the team how importance it is for them to stay focused on playing to achieve their goals.

“We’ve got three playoff deciding games coming up as far as who wins the area championship and hosts the area tournament,” Lane said. “We feel like with the schedule we put together and the things that we’ve been through so far, we should be prepared for anything now going down the stretch.”

The Southside Panthers finished the first half of their season with a .500 record at 8-8. In area games, the Panthers are 1-1 with a 35-31 loss to Montevallo and a 57-44 win over Montgomery Academy.

“That first half [of the season] prepared us for the second half,” Southside head coach Lenord Jones said. “They’re hungry. If I can keep them hungry, then I think we’ll do something

According to Jones, his team is starting to put it together heading into the final month of the regular season.

“The team seems to be coming together now,” he said.

Jones’ resolution for his team is to secure the home games and area games left on the schedule so they can try and host the area tournament at Southside.

“We’re focused on our area and our home games,” Jones said. “Our goal is to host the area. I don’t think Southside has hosted the area in about 10 years. It’s almost like jumping a hurdle… If we can do that, that would be something very positive for Southside.”