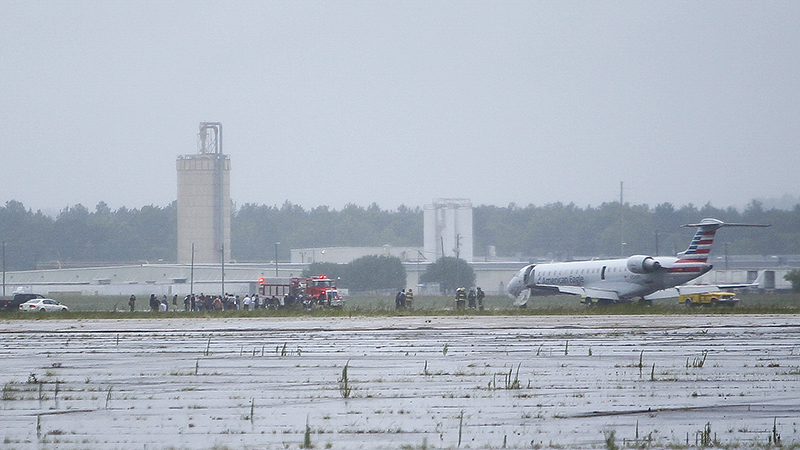 commercial jet made an emergency landing at Craig Field in June after smoke was reported on board.

Through Saturday, the Times-Journal will be looking back at the top stories of 2017. Here’s a look at memorable stories from April-June.

The Selma City Council approved a contract with Alabama Power Company in April to replace city street lights with LED bulbs. The new lights were put up on heavily traveled streets first and then continue to be put into neighborhoods.

A Dallas County 19-year-old was allegedly accidentally shot and killed by another 19-year-old on April 14. Rufus Williams Jr. was pronounced dead at the scene. Ratravious Sanders was charged with murder. The gun used in the shooting was later determined to be stolen from the Selma Police Department evidence room.

Prince Chestnut won a general election for Selma Mayor Darrio Melton’s seat in the Alabama House of Representatives with 95 percent of the vote. Chestnut faced Independent candidate Tremayne “Toby” Gorden, who qualified to run on the day of the primary election in January.

While this year’s Battle of Selma reenactment was canceled, soldiers from the war, particularly those housed at Cahawba’s prisoner of war camp, were honored at a special service in April.

The Alabama Department of Transportation started a project to pave Broad Street from the Edmund Pettus Bridge to Highland Avenue in late April.

An evidence technician with the Selma Police Department was arrested for allegedly stealing guns and jewelry from the department’s evidence vault. Adrianne Michelle Canterbury, was charged with theft and tampering with evidence.

David Johnson and his business partner Julius Talton purchased Vaughan Fitness Center from the hospital. The building now serves as the main hub for Johnson’s In Shape Fitness.

MAN SHOT IN YARD WHILE LEAVING FOR WORK

HARVILL NAMED BOY OF THE YEAR

Morgan Academy’s Greyson Harvill was named the 68th Paul M. Grist Boy of the Year during a ceremony at the Carl C. Morgan Convention Center.

Angela Mangum, superintendent of Selma City Schools, was placed on administrative leave for allegedly breaching her contract for applying for another job without telling the board of education. Mangum and the board later agreed to a $60,000 settlement.

The flight was traveling from New Orleans to Washington, D.C. Passengers were taken by bus to Montgomery and continued on another flight to D.C.

Riverdale Credit Union was taken into conservatorship by the National Credit Union Administration due to “unsafe and unsound practices” in June.