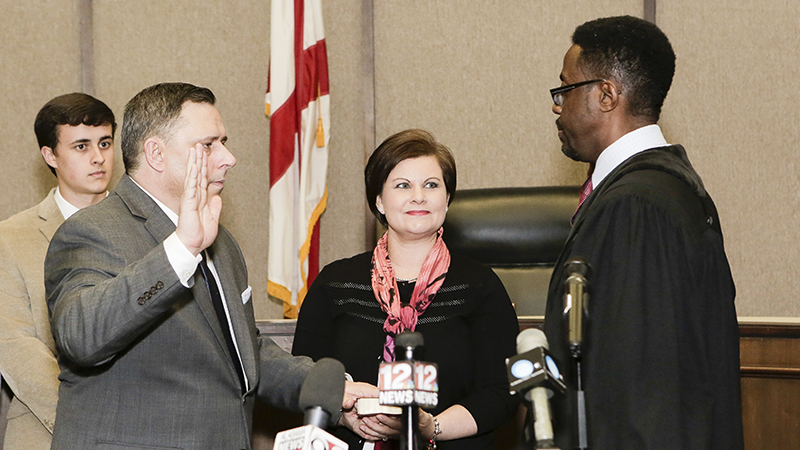 Spencer Collier is shown being sworn in as chief of the Selma Police Department by Judge Prince Chestnut in January.

Through Saturday, the Times-Journal will be looking back at the top stories of 2017. Here’s a look at memorable stories from January-March.

Richard Walters was named president of First Cahawba Bank in January. He has been with the bank since its founding more than 10 years ago, holding several job titles.

Walters succeed Catesby Jones, who remains with the bank as chairman of its board.

The Selma City Council voted to form the Selma Redevelopment Authority in January and charged the authority with the task of revitalizing downtown. Juanda Maxwell was later chosen as the authority’s chairwoman.

The authority would go on to hire an executive director in December and lease the St. James Hotel the same month with hopes of working with a company to reopen the hotel.

Brown Chapel was awarded a $500,000 grant from the National Park Service to help preserve the historic church. The grant is part of the NPS’s African American Civil Rights grant program.

Don McMillan was sworn in as Fourth Judicial Circuit Court judge during a ceremony in January at the Perry County Courthouse. McMillan’s circuit presides over Dallas, Bibb, Hale, Perry and Wilcox counties.

The city recorded its first homicide on Jan. 14 after the body of a 23-year-old man was found in a car on Selma Avenue near Old Live Oak Cemetery.

Tyrone Booker was charged with murder in January with the Christmas Day 2016 murder of 73-year-old Juanita Tripp. The grandmother was killed around 6 p.m. standing in the doorway of her home as she was calling her grandchildren to come inside. A second suspect, Jalin Booker, was arrested later in the month and charged with murder.

Former ALEA secretary Spencer Collier was tapped to lead the Selma Police Department. Collier was sworn in Jan. 30 as Selma Police Chief by Judge Prince Chesnut. Collier and Selma Mayor Darrio Melton are friends going back to when both served in the Alabama Legislature.

Prince Chestnut appeared to have won Selma Mayor Darrio Melton’s former seat in the Alabama House of Representatives in a special election on Jan. 31. However, an independent candidate, Tremayne “Toby” Gordon, qualified on the last day to run as independent, forcing a general election later in the year.

Organizers of the annual Battle of Selma canceled the 2017 reenactment in a dispute with the city over fees for services like police, fire and garbage.

The city had asked the Battle of Selma to pay $22,000, which organizers said they simply didn’t have. The 2018 Battle of Selma has also been canceled and the future of the popular event remains in doubt.

HotelFUBU, a company affiliated with the popular hip-hop apparel company, shown interest in February in buying the St. James Hotel for $400,000.

The talks continued all the way until August, when the deal fell apart after the company couldn’t find the backing for renovations.

Facebook co-found and one of the richest men in the world, Mark Zuckerberg, visited Selma on a tour of the state in February.

Zuckerberg and his wife Priscilla Chan posted a photo on Facebook from outside the Selma Times-Journal holding a copy of that Sunday’s newspaper.

The couple also visited the Selma Interpretive Center while in Selma and had lunch at Jackson’s Fried Chicken in Camden.

JUBILEE MOVES AFTER DISPUTE WITH CITY

The Bridge Crossing Jubilee committee decided to move parts of its annual Bloody Sunday commemoration in a dispute with the city over fees for police, fire, garbage and other services. The city had asked Jubilee to pay $24,000 for the services, but event organizers said they couldn’t afford that. Part of this year’s Jubilee was moved to private property in Selmont.

The Selma Interpretive Center celebrated completed renovations of its second and third floors in February. The new exhibits include the Congressional Medial that was awarded to foot soldiers in 2015.

Construction started on a streetscape project in March to improve Water Avenue from the bridge to Church Street. The project includes new sidewalks, brickwork and landscaping and was completed in the summer.

The Selma Food Outlet opened in March in the space formerly occupied by Calhoun’s.

Longtime Alabama Power employee and Selma District Superintendent Art Scroggins retired at the end of March after almost 45 years with the company. Scroggins came to Selma on the Fourth of July weekend in 1972, loading up his 1955 Chevrolet with everything he owned: “My clothes, my stereo and my shotgun — that was it,” he said during a retirement ceremony.