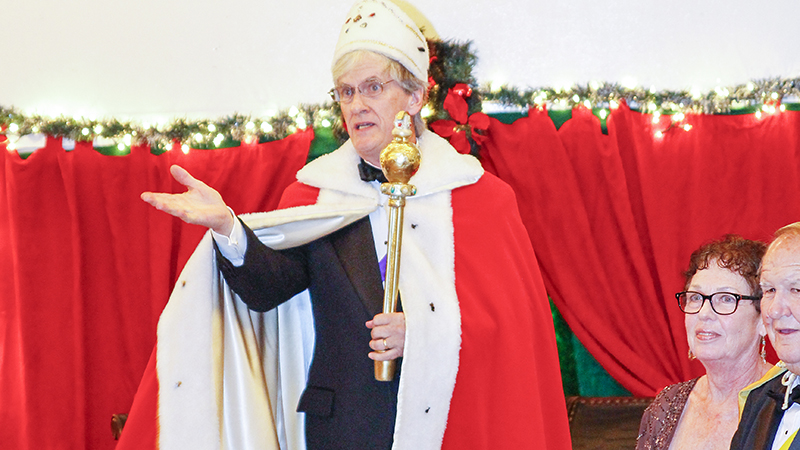 Kincey and Joy Green were crowned royalty for the evening at the Knights of Revelry ball, an annual Christmastime tradition in Selma.

The canes could be heard tapping the Selma Country Club ballroom floor last Friday, harkening the annual Knights of Revelry ball, a Christmastime tradition in Selma.

The social club was said to have started around 1933 as a diversion from the Great Depression.

“Their purpose was to have a party and have a good time,” said longtime member Bill Gamble. “The knights and the ladies get dressed up to celebrate at the ball. There is a different king every year. Basically, it’s just how long you’ve been in, and when your time comes you get to be the king.”

Gamble said that though the king changes each year his “formal” name stays the same, “B-Ski.” This year’s king was attorney Kincey Green, who was royalty for the evening along with his wife, Joy.

The annual tradition is now in its 84th year, having been founded by Gamble’s father Harry Gamble as well as Edward Stewart and others based on traditions at several universities.

“It has continued ever since that time, having an annual ball,” Gamble said.  “This is part of something that has been going on continuously for such a long period of time.”

Shortly after 8 p.m., the Knights of Revelry slowly entered the ballroom by hierarchy, with the oldest knight of membership entering first. They walked along the edges of the ballroom while tapping their canes until it was time to introduce the new king and queen.

After the king and queen were seated, it was time to announce the ladies. The ladies entered the ballroom, one-by-one, as their names were called. They walked to the throne and received a gift after greeting the new king and queen.

Gamble has high hopes that this tradition will continue for many years to come, especially as it nears the 100-year milestone.

“I certainly hope that the tradition will continue,” he said, “There is always a lot of fun, and it is a celebration.”