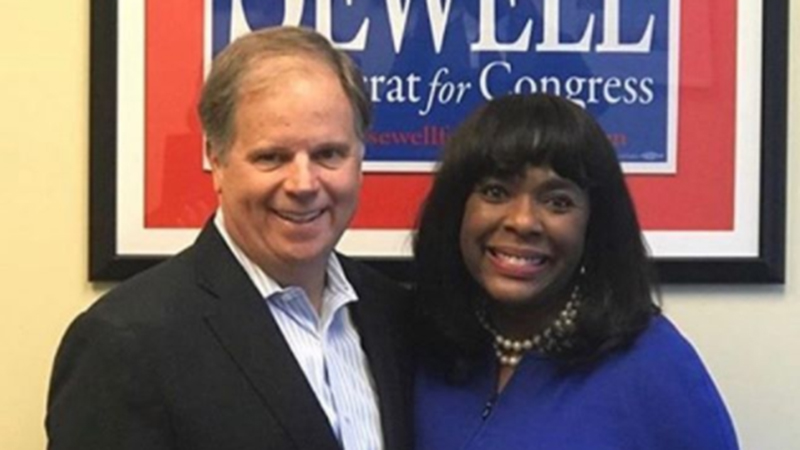 When Doug Jones gave his victory speech Tuesday night after beating Roy Moore for a seat in the U.S. Senate, U.S. Rep. Terri Sewell stood just behind him celebrating.

Sewell’s office released a statement from the congresswoman Wednesday afternoon celebrating Jones’ victory and welcoming him to Congress.

“Doug Jones’ historic victory happened because Alabama voters turned out in record numbers and decided to put character and integrity over party affiliation,” Sewell said in the statement. “Voters last night opened a new chapter for Alabama, placing our state on the right side of history.”

As results started to trickle in Tuesday night, Moore took the lead, but results from Dallas County helped change that. More than 14,000 voters went to the polls in Dallas County. Jones earned more than 10,000 votes to Moore’s 3,485, giving the Democratic candidate an additional 7,000 votes.

Sewell was the only democrat from Alabama serving in Washington D.C. until Jones’ election.

“I am honored to welcome Doug to the United States Senate, and I know that, on issues ranging from tax reform to healthcare to job creation, he will put the people of Alabama first,” Sewell stated. “I hope that the voices of those he represents will be heard on the important issues that are now before the U.S. Senate.”

Jones became the first democrat to be elected to the U.S. Senate for the state of Alabama in more than two decades.

Richard Shelby was the last Democratic candidate to be elected to the U.S. Senate from Alabama in 1992. Two years later, Shelby switched his party affiliation to Republican.

Sewell is calling for a delay on a tax reform vote until Jones is sworn in.

“As Congress considers far-reaching tax legislation this December, I urge Senate leadership to delay a vote on the tax bill until Senator-elect Doug Jones is sworn into office,” Sewell stated. “For one of the most consequential votes this Senate is likely to take, our state deserves to have its duly elected Senator at the table.”