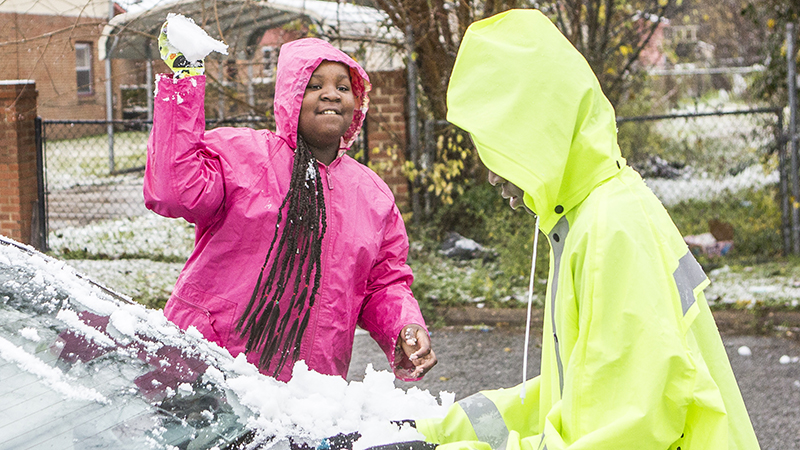 People in Selma and Dallas County woke up to snow falling Friday morning, and for some, it was like an early Christmas present.

“It really gives you that Christmas vibe considering Christmas is around the corner,” said Charles Johnson, who was sitting on his porch and enjoying the view. “In the state of Alabama, you rarely have snow that actually sticks.”

“Most of the children are out of school, and it really just gives you the sense of being able to enjoy the holidays with your family,” Johnson said. “There have been quite a few snowball fights.”

The snowfall started in Dallas County after 7 a.m. and was on and off early in the day until the afternoon when it picked up just before 1 p.m.

Leonard Ervin said it has been quite a while since Selma saw snow like Friday, so he enjoyed it as much as he could.

“We haven’t seen this in a long time, so I came out here and played in it like a big kid,” Ervin said. “I had me and my dog out here running in the snow. He was running and going crazy.”

Zoe Martin, who is originally from New York but lives in Selma now, said it was a small taste of home.

“I was surprised it was snowing, but it’s not enough for me because I’m from New York,” she said.

Nyauna Harris, who played in the snow with Ervin and  Martin, said when Ervin told her it was snowing, she could hardly believe it.

“When he told me, I didn’t believe it at first. I got to the window, and it was snowing,” she said. “We came out and played. I almost slipped, but I played.”

The National Weather Service did not have any reported measurements from Dallas County early Friday afternoon. A resident in north Dallas County estimated around 2 inches of snowfall around. Counties surrounding Dallas County had reported accumulations of 2-6 inches.

“It’s an exciting moment. Most of the time we get snow it’s not very much,” Harris said. “It’s little flakes and then it stops. But it’s like it just kept going.”