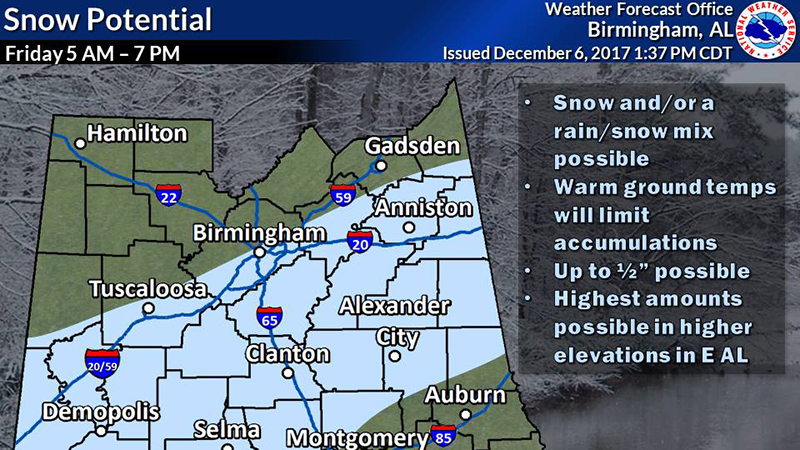 The National Weather Service in Birmingham is forecasting a chance of snow for Friday morning. However, accumulation is not expected due to air and ground temperatures.

People in Selma and Dallas County can expect the cold rain to continue to fall Thursday, but there could be a chance of snow Friday.

As of Thursday evening, the National Weather Service in Birmingham has Selma in the snow potential area.

“Once we get into late Friday morning into Friday afternoon, we could potentially see a transition into a rain-snow mix, maybe even some light snow at some point Friday afternoon or evening before the moisture finally moves out of the area,” said Tara Goggins, a meteorologist the National Weather Service in Birmingham.

Right now, only the central part of the state is expected to see a mix of rain and snow. Goggins said Selma could see around a quarter of an inch or less of snow. A warm ground temperature will limit accumulations.

That could all change though. Goggins said the NWS will spend the next 24 hours refining and adding more details to its forecast.

“Right now, there are kind of still too many uncertainties with exactly where that transition zone is going to occur and how much, if any, accumulation will occur,” Goggins said. “It’ll be the battle between the cold air and the moisture as to where we see that transition to snow.”

A cold front moved in a couple of days ago followed by rain.

Temperatures for Thursday are expected to be in the 40s but will drop drastically Friday.

“It feels cold outside now, but it will get much cooler Friday night,” Goggins said. “Right now, for the Selma area we have lows in the mid-20s Friday night.”