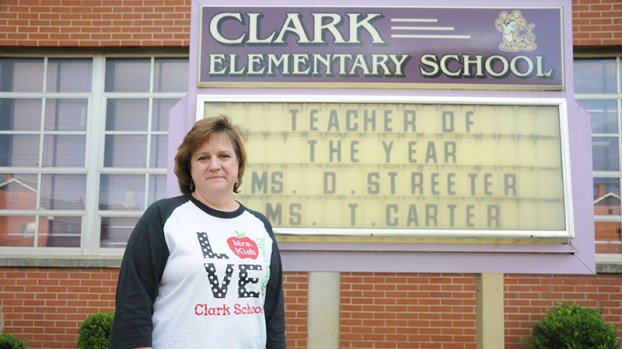 Clark Elementary first-grade teacher Sheryl Kish has more than 25 years in the classroom.

There’s motivational and instructional posters and banners on the wall along with learning aides, books and supplies any first grade might need.

Kish’s teaching career began soon after she graduated from Auburn University at Montgomery. The Orrville native taught in Lowndes County for six years and in private schools for six years before she began teaching at Clark.

“Education was always valued by my family,” she said. “To see the state of education in Alabama, I just knew we needed teachers.”

Kish has been teaching first grade at Clark for 15 years now, and she still loves every minute of it. She spends the whole first week of school focused just on getting to know her new class, and asking them about their aspirations.

“I love first grade because their lightbulbs go off,” she said. “You get to watch that ‘Wow’ moment when they figure a word out.”

This year, Kish’s first grade class started out with 14 students, but just a few weeks away from Christmas break her classroom now has 20 students. In her classroom, Kish prefers to use Alabama Math, Science and Technology Initiative (AMSTI) resources to help teach her students.

AMSTI operates under the premise that students are better able to learn math and science when they are able to relate it to their daily lives.

Kish’s classroom is currently learning about how plants and animals work together in their habitats. At the far end of the room, Kish has an aquarium with goldfish and two plastic tubs filled with dirt occupied by armadillidium’s, better known as roly-poly’s, and millipedes.

“Because of the math and science initiative, I have those materials that I wouldn’t normally have,” Kish said.

She also uses technology as another hands-on learning tool for her students. Sometimes, Kish lets her students use the class Smartboard to teach the day’s lesson. They also use the class computers to work on reading exercises.

“Watching them learn to read, that’s my heart,” Kish said. “When they can sound out a word and figure out that the letters make sounds or words. That is so powerful when they realize that not only can they read it, but they can write it and someone else can read it.”

Kish is fully invested in her first-grade students, and her dedication to her career bleeds outside of the classroom. Earlier this year, Kish took it upon herself to apply for a grant through the Kids in Need Foundation. On Monday, Nov. 13, her classroom received $300 worth of school supplies.

“It was something I found on-line this summer,” she said. “The kids received notebooks, folders, markers, glue and just basic supplies. I knew we needed it. Most of our kids don’t bring supplies with them to school, so it was a huge help.”

At the end of the school day, Kish makes sure her students have their bags packed and their coats on before she escorts them outside to wait for pick-up. Her dedication to education is why Sheryl Kish is The Selma Times-Journal’s Teacher of the Week.

Plenty to do Saturday to ring in Christmas

There won’t be a shortage of ways to celebrate Christmas on Saturday. The calendar is packed full of events filled... read more