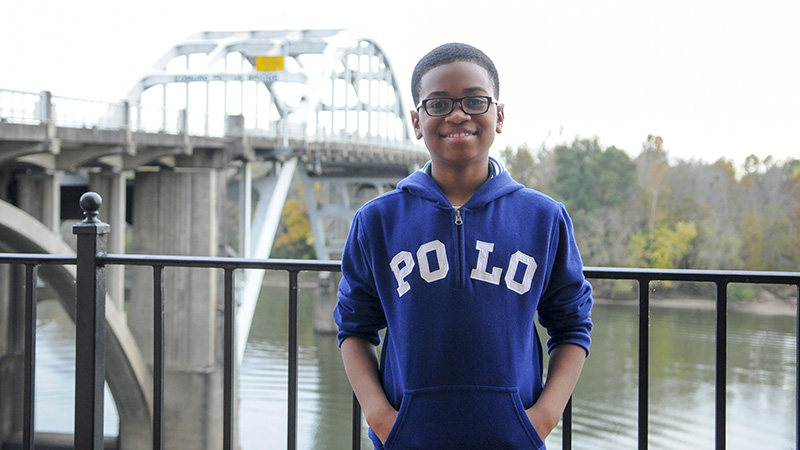 Caleb Smith, an 11-year-old student at School of Discover, has earned a $500 grant from Youth Services of America and Disney for a recycling program.

Caleb Smith, an 11-year-old sixth grader at School of Discovery, is hoping to make a difference in the community by starting a recycling initiative.

He was recently awarded a $500 Summer of Service Grant from Youth Services of America and Disney to help him carry out that task.

“I want to live for a long time. I don’t want anything bad to happen to the environment, or there to be a crisis” Smith said. “It takes 200 to 500 years for plastic to decompose. It’s just sitting taking up space.”

The Summer of Service program is an effort to inspire children between the ages of 5 and 18 to make a difference in their community.

Smith said he was at home one day sitting on the couch when his mom, Crystal, approached him with the idea of the grant, and he took it and ran with it.

“It means a lot to me because there are so many other things he could be doing,” Crystal said.

From there, Caleb came up with the idea of Selma Recycles to teach people how to recycle and about the importance of it.

“I picked this idea about recycling because there is nowhere in Selma to recycle the daily items I use,” he said.

“He’s always been interested in keeping the environment clean,” Crystal said. “We moved here when he was three years old, and he wondered why there was nowhere for us to recycle anything.”

With the help of his mom, Caleb had to essentially write a grant for Selma Recycles, which detailed what the project was. After sending it off in September, they got the news a few weeks ago that he was awarded the grant.

“I was excited and kind of nervous because I knew what was coming,” he said. “I had a lot of speeches and interviews and things like that, so I was scared too.”

Now, he will be seeking out volunteers to help out with the initiative, which includes a door-to-door flyer campaign to raise awareness about recycling and two recycling days where people are asked to drop off certain recyclables.

Two volunteer meetings have been scheduled for Dec. 5 and Dec. 19 at 4:30 p.m. at the Selma-Dallas County Public Library. Crystal said the first meeting will be for getting people signed up, and the second meeting will be to assign tasks.

He is looking for volunteers of any age to join the effort.

Caleb, his mom and the volunteers they get will go door to door in Ward 3 teaching people about recycling.

Then, on Jan. 7 and 14 at Bloch Park, there will be recycling days. They are asking people to bring items labeled plastic one or plastic two to be recycled. The recyclables will be sorted out and then taken to a company in Montgomery that recycles plastic.

Caleb said he hopes this project inspires other children his age to get involved in the community as well.

“Other kids can do the same thing I did. They have a voice, and they can make a difference in the city they live in,” Caleb said.

He and his mother said they hope to see an effort to recycle continue after the Selma Recycles project. People can follow the progress of Selma Recycles on Facebook and other social media platforms.