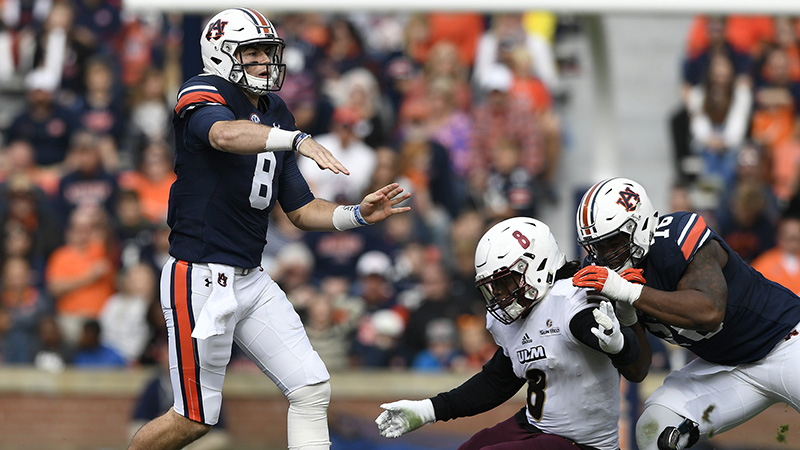 Alabama’s Jalen Hurts had much less to say when asked whether he likes playing in these kind of big-game environments. “I like winning,” he said simply.

The two sophomores have both done just that. They’ve led their teams into Saturday’s game between the sixth-ranked Tigers and No. 1 Crimson Tide with Southeastern Conference and national title hopes still intact .

“It’s very exciting,” said Stidham, a Baylor transfer. “Looking back on everything, you know, I think this is exactly why I came here, to play in a game like this with these kind of implications. This is why you play Division I football.

“Especially at a place like Auburn, in this state. It’s against Alabama. I mean, it’s a very big deal and I’m really, really looking forward to it.”

Their approach to talking about the rivalry game differs, and so do their playing styles. But they’ve been among the SEC’s top quarterbacks and both can deliver the ball downfield when called upon.

If Hurts wasn’t particularly chatty with reporters this week, his record says plenty.

The reigning SEC offensive player of the year is 24-1 as a starter, leading Alabama to the national title game as a freshman.

When Alabama faced a strong fourth-quarter challenge, he led two touchdown drives in the final 10 minutes against No. 16 Mississippi State , throwing for a game-winning 26-yard score to DeVonta Smith with 25 seconds left.

Hurts has reversed the dynamic for Iron Bowl defenses. Coach Gus Malzahn was typically the one more likely to have a quarterback who’s dangerous running and passing, but now it’s Alabama while Stidham is more of a dropback passer who runs on occasion.

While both offenses rely heavily on strong running games, Hurts is a big part of Alabama’s. Malzahn calls him “one of the biggest weapons there is.”

“Probably the scariest thing is when things break down he takes off and he’s like a running back,” Malzahn said.

Hurts has run for 686 yards and passed for 1,828, already accounting for more career rushing touchdowns (21) than any other Tide quarterback.

He also makes few big mistakes. Hurts has been intercepted only once in 200 attempts.

Playing already in a national and SEC championship game have made Hurts an old hand in big games like this.

“I don’t get bothered by stuff like that,” he said. “I don’t think it’s relevant to me. I just go out there and play.”

It’s newer territory to Stidham, though he handled it deftly when No. 7 Georgia , which topped the playoff rankings at the time, came to Jordan-Hare Stadium a couple of weeks ago. He had struggled in the two biggest games previously, losses to No. 4 Clemson and No. 19 LSU.

He has completed 73 percent of his passes in the four games since the LSU game with eight touchdowns against just two interceptions. Stidham has topped 200 passing yards in each of those games.

“I think their quarterback has played better and better as the year’s gone on,” Alabama coach Nick Saban said. “He’s always been a really talented guy. I think he has a tremendous amount of talent. He’s athletic. He’s got a really good arm. He makes quick decisions to get the ball out of his hand.

“But I think he’s improved because he understands the offense better and they’ve done a better job as the year’s gone on of giving him time to make plays in terms of their pass protection and he’s been able to take advantage of it. They’ve made a lot of explosive plays, and he’s especially good throwing the ball down the field.”

Alabama tailback Damien Harris can go even deeper on Stidham’s improvement. The two were teammates on their first year of tackle football while in elementary school in Kentucky. They still talk fairly regularly and describe each other as close friends.

“I remember talking to him whenever he was transferring from Baylor and looking forward to seeing how his process would be and were he ended up landing,” Harris said. “And I prayed he wouldn’t go to Auburn, but he did anyway, so we’re looking forward to it.”