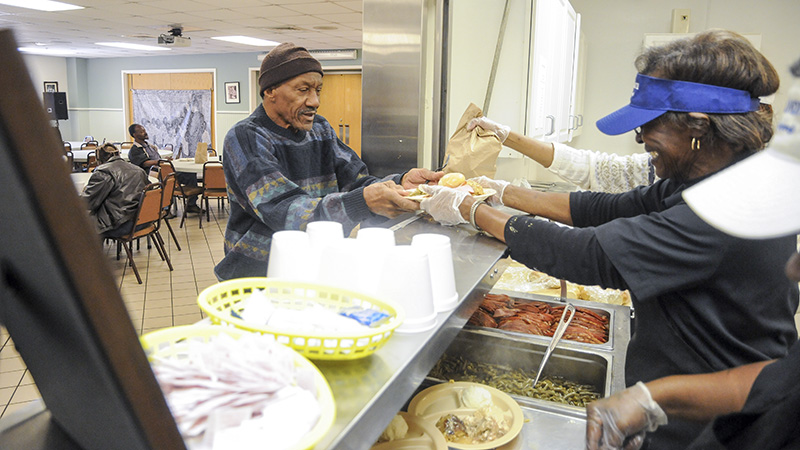 Julia Drain hands a plate to a man dining at Edmundite Missions on Thursday.

The Edmundite Missions Bosco Nutrition Center needed a three-day head start to prepare for the free meals they served on Thanksgiving Day, according to chef Harry Dominick.

“Everything went well,” he said. “The food is hot, it’s good and you see the smiles on everybody’s faces.”

Dominick is the director of The Bosco Nutrition Center, and he oversaw the preparation, cooking and delivery of hundreds of meals that were served on Thursday.

“We make everything fresh on-site. We had to feed about 600 today,” he said. “So, we started about three days ago cooking the turkeys fresh.”

The soup kitchen opened early on Thursday and packed to-go bags to be delivered. Volunteers arrived at the kitchen at 6 a.m. to help pack and deliver more than 350 meals. This year, about 20 volunteers came to help Dominick and his staff.

“We sent out 370 meals to the homes this morning,” Dominick said. “The Knights of Columbus helped out with that. They had volunteer drivers come in and help.”

In addition to the deliveries, the Bosco kitchen staff also had to prepare for the lunch that they serve every day from 11:30 a.m. to 1 p.m. They filled plate after plate with turkey, gravy, dressing and more traditional fixings for their guests.

The kitchen serves two meals a day year-round to those in need. According to Dominick, all kinds of people come to the soup kitchen for a good and hot meal.

He’s served people who served in the military, working people and homeless people.

“You get all types of folks that come in here from all walks of life,” he said. “You got some people that just lost their job, so that helps out when they know they can get a hot meal for lunch and dinner.”

Julia Drain stood over the steam table fixing plates and serving them to her hungry guests. Even when she’s at home, Drain enjoys making cakes or cooking food for anyone in need.

“It’s better to give,” she said. “I like giving to people who need it.”

Brandon Martin, who has worked at the soup kitchen for nearly seven years, said it felt good to see so many volunteers come and help serve the community.

“It’s very important to know people and give back to our friends and family,” he said. “It keeps everybody happy and smiling.”

According to Martin, they have actually had bigger crowds in previous years, but he’s still glad to be able to serve those who do come.

“We usually have a larger crowd,” he said. “Some of them don’t really have anything to eat, so I’m glad we’re feeding them to make them feel happy and special.”