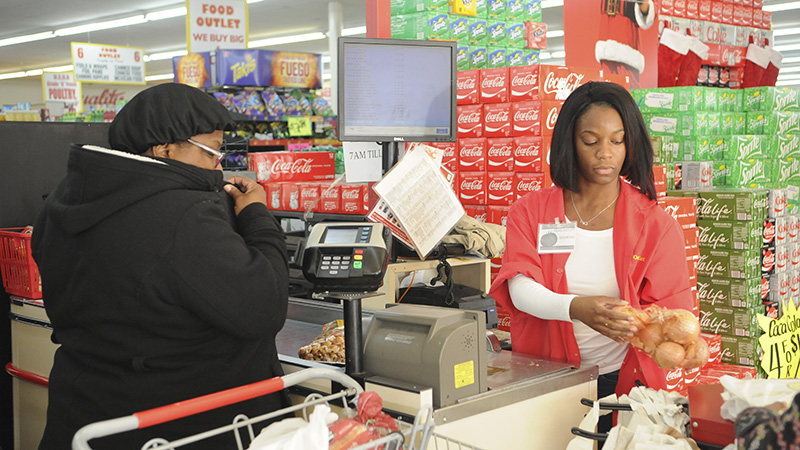 Diamond Lowe, a cashier at Food Outlet, checks a customer out Wednesday during the pre-Thankskgiving rush.

While some folks were already busy cooking and getting their Thanksgiving dinners ready, others were making last-minute trips to the grocery store Wednesday.

A steady flow of customers weaved up and down aisles Wednesday afternoon at Food Outlet on J.L. Chestnut Jr. Boulevard picking up items they may have forgotten or left off their shopping lists.

“It’s wide open from the time you open to the time you close,” said store owner Joseph Fuller. “People are coming in and getting anything whether it be a turkey or cranberry sauce.”

Fuller estimated the store has gone through at least a couple hundred turkeys over the last several days. He said the holidays are a little different than most other days

“If you haven’t ever been in the grocery business, it’s different, especially this time of year,” Fuller said. “I guess we can call this Black Wednesday because this is the opposite of what’s going to happen Friday. There won’t be anybody in here because they’re going to be eating leftovers and be out Christmas shopping.”

Cashiers were busy scanning item after item, while other employees were rounding up shopping carts to keep them available for customers as they came in the front door. Other employees were checking the shelves making sure certain items were still in stock.

One of the most common items people forget to buy, according to Fuller, is cranberry sauce –– a Thanksgiving staple.

“Cranberry sauce is right at the top of the list. It’s got to be about the number one thing people forget. I don’t know if they just don’t have it on their list or what,” he said.

For Regina Gates, who was in town from Chicago, Illinois, it was a few different items.

“I’ve got to get some sweet potatoes, just a little shortening and some fresh peaches to make a pie,” she said before going inside and making her purchases. “I have already started cooking. I brought some things from up north –– ham, some vegetables and love.”

She also remembered to buy pineapple. For others, their last-minute items were eggs, drinks and spices.

“I needed a couple of little things like nutmeg and a little seasoning, some sugar, butter and I’ll probably get some tea and stuff,” said Clara Hudson as she made her way through the store.

She said she planned to get busy cooking as soon as she got home from the store.

Food Outlet will be open Thanksgiving Day from 7 a.m. until 3 p.m., according to Fuller. Several other grocery stores in town will also be open. Winn-Dixie’s Thanksgiving hours are listed as 7 a.m. until 4 p.m. Walmart will open at 6 a.m.