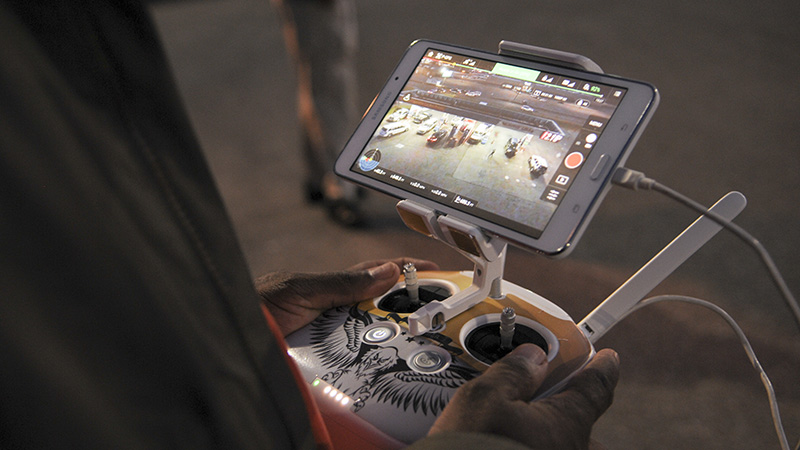 While holiday shoppers are out and about buying Christmas gifts and food to cook for Thanksgiving dinner, the Selma Police Department is keeping a close eye on high-traffic shopping areas.

“We want people to feel safe as they are out there shopping,” said Lt. Tory Neely with the Criminal Investigations Division. “A lot of people won’t come out late in the evening and shop when it is dark because they don’t feel comfortable. With police in the area, they feel a lot more comfortable and relaxed.”

As part of an effort to deter crime during the holiday season, the department has brought in a mobile command center, which was set up in the Walmart parking lot Monday evening.

“It’s pretty much a mobile police station,” Neely said. “It keeps us warm, has bathrooms so we don’t have to be running back and forth to headquarters, computers so we can take reports here on site. It’s got a telescopic camera that shoots up.”

Neely described the mobile command center as a police station on wheels. If an incident takes place, they can file a report right there on site instead of having to go back to the police department. He said they can even process an inmate after being arrested.

“Even if we arrest somebody, we’re going to bring them over here, process them right here and send them straight to the county jail from out here,” he said.

Neely said the main benefit of having the command center is the police presence where the majority of people are shopping. 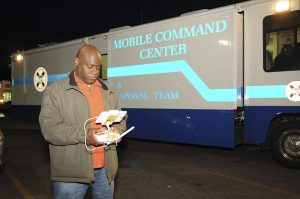 Neely operates a drone Monday while on special shopping detail.

“The number one thing as far as helpfulness, is the presence. People see the police on patrol, and they’ll say hey, let’s just move on down the road a little bit,” he said. “When they see vehicles or police cars in the parking lot, they act differently.”

The command center will be set up in Selma on and off during the holiday season. Neely said the department will also implement the use of observation towers.

“There’s a multitude of things we’re going to be doing. If we do the same old things, criminals get to thinking they’ve got a way around that plan,” he said. “If we keep moving and getting ahead of the game, then we keep them thinking.”

Neely said the holiday shopping detail includes the mobile command center, officers in marked and unmarked vehicles and four K-9 units. The department will also have eyes in the sky by using drones to monitor parking lots.

“A lot of people don’t even look up and pay attention to what’s over their head. They just look down walking,” he said. “By just hovering in one location, I can spin the whole parking lot.”

Neely said using the drone allows them to cover a large area. He can monitor a store across the highway, and with the click of a button he can take a picture or record what he is seeing, which in return can be sent to officers to help them identify a suspect or suspicious person.

Neely said they chose the Walmart parking lot as the first location to set up because a car was broken into over the weekend there. He said the department is trying to get a jump on the crime before it spikes.