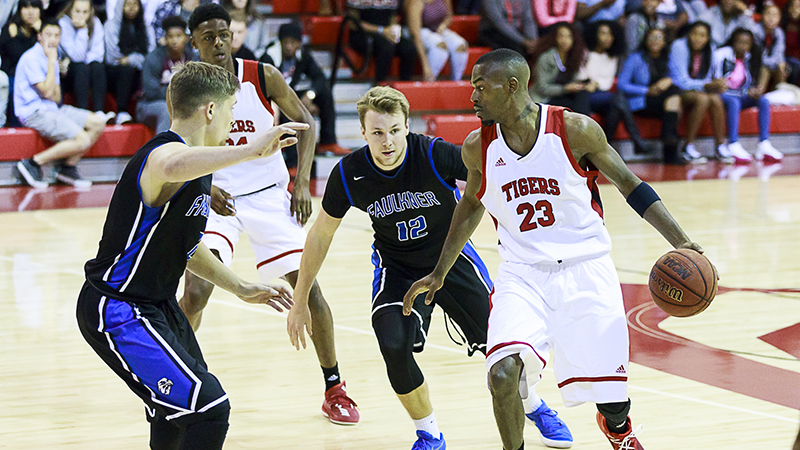 Former Selma High basketball player Charles Eaton was named Athlete of the Week for the Gulf South Conference this past week.

“It’s really a blessing,” Eaton said. “I’ve been gone from the game like two years and winning Player of the Week for the first week is pretty big on my behalf as an individual.”

The 6-foot-3 senior guard at the University of West Alabama started the 2017-18 season shooting .528 from the field in his first two games.

“I was just taking what the defense gave me,” he said. “I was staying poised and letting the game come to me.”

In the first game of the season, he shot 8 of 14 from the field for 22 points, secured eight rebounds and had five steals in the win against Florida Southern. He scored 31 points against Eckerd College the following night while recording nine assists and seven rebounds.

The West Alabama Tigers are now five games into the season and Eaton still has the hot hand. He is averaging 27 points per game while shooting 53.6 percent from the field and 46.2 percent on three-pointers.

He is leading the Gulf South Conference in points with 135. The next highest scorer in the conference is already 42 points behind him.

Eaton was a star player at Selma High, where he played for coach Woodie Jackson. In high school, he averaged 25 points per game, was the No. 2 player in the state of Alabama and a first team all-region selection.

Eaton began his college career playing at Lawson State Community College before transferring to Northwest Mississippi Junior College, where he averaged 13 points per game in his sophomore season.

In the 2014-15 season, he played for the Tigers and was averaging 13.8 points per game while shooting 45 percent from the field.

After finally working his way up to Division II basketball, Eaton’s biggest challenge came later that summer when his son Charles Jr. was born in July 2015.

“It really was a big sacrifice, because I had to provide for him,” he said. “I had to choose between basketball and my son, and I chose my son.”

Two years later, Eaton and his family were financially stable enough for him to return to West Alabama and pursue his passion of playing basketball.

“Financially, he’s pretty good, and that’s the reason I came back to finish my senior year,” he said. “I was eager to get back out there and perform again.”

Now, Eaton is only looking forward. His two-year old son gets to watch some of his dad’s games, and Eaton is continuing to score.