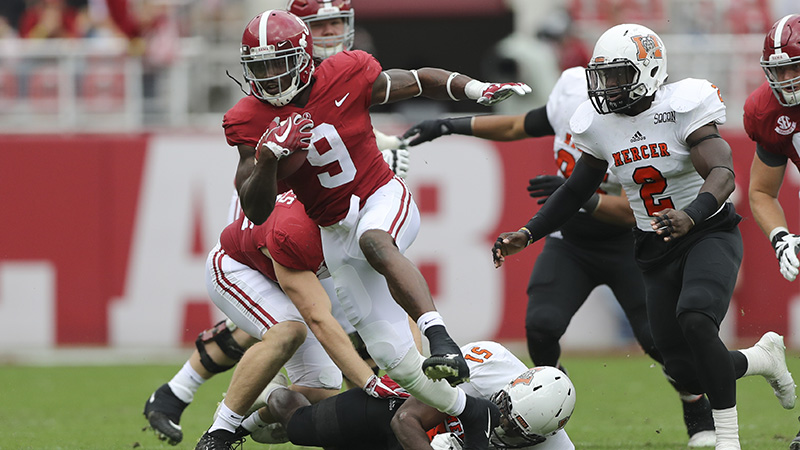 TUSCALOOSA (AP) — Alabama came out of the locker room with one touchdown drive after another, clearly not too distracted by thoughts of the Iron Bowl.

Jalen Hurts passed for 180 yards and three touchdowns in a little more than a quarter and the top-ranked Crimson Tide beat FCS team Mercer 56-0 on Saturday with a precision performance in an obvious mismatch.

“We just went out and executed what we needed to do and gave the fans a show,” safety Hootie Jones said.

With the stands far from full, the Tide (11-0, 7-0 SEC, No. 1 CFP) raced to a 35-0 halftime lead in what amounted to a tuneup for the team’s biggest game. Now, Alabama heads to No. 6 Auburn with the winner facing No. 7 Georgia in the Southeastern Conference championship game in Atlanta.

The Bears (5-6, 2-4 Southern Conference) also lost to Auburn 24-10 early in the season, when the Tigers committed five turnovers.

“I don’t really think Auburn had found themselves yet,” Mercer coach Bobby Lamb said. “They were kind of spinning. They didn’t know which way they were going. They racked up 500 yards on us, but we got five turnovers. We were able to move the ball a little bit better.

“This team here (Alabama) is really good in all phases of the game and you add their punter who can punt it to the moon and back, it’s a very difficult football team.”

Hurts led Alabama to touchdowns on each of his four possessions, completing all seven of his attempts and running for 30 yards. He hit a wide-open Calvin Ridley for a 66-yard touchdown, giving Ridley 103 yards on three catches before the half.

Freshman backup quarterback Tua Tagovailoa came in with just under 12 minutes left in the second quarter and exited early in the fourth.

Alabama outgained Mercer 530-161 in total yards. The Tide has outscored opponents 253-43 collectively in the first half.

It was an FBS record 73rd consecutive win against unranked teams. Now, it’s OK to look ahead just a bit.

“I think everybody understands the challenges we have ahead of us and the importance of all those games,” Tide coach Nick Saban said.