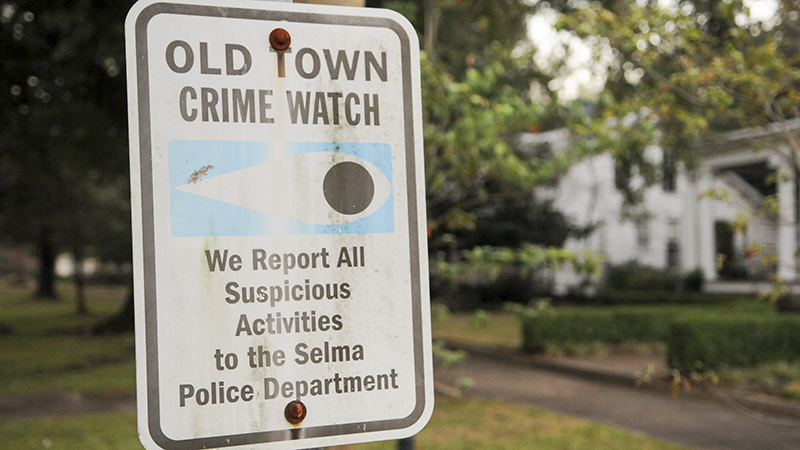 The meeting was called to discuss safety tips and recent crime in the area.

After Old Town Neighborhood Watch coordinator Jacque Johnson thanked everyone for coming, she gave the floor to Capt. Mike Granthum with the Dallas County Sheriff’s Department, who went over a number of topics including when it is okay to defend yourself, when officers can make an arrest and safety tips.

“The first question I always get, and I hate to start off like this because it sounds rude, crude and shrewd … is when I shoot somebody do I have to drag them in the residence,” Granthum said.

He said that is an age-old saying, so he explained to the group when it is okay to defend themselves. He explained Alabama Code 13A-3-23, which is the use of force in defense of a person.

“Years ago, if you were the person being attacked, if there was an avenue of escape for you, it was your responsibility to get away from the threat,” Granthum explained. “You had to actually leave the threat. Now, it’s stand your ground. You no longer have to leave the threat, and that’s where the controversy comes in with this law right here.”

Granthum said there hasn’t been a stand your ground case in Dallas County yet.

“We haven’t had a case in Dallas County to see how it’s going to turn out, but it’s going all over the United States,” he said.

Some of the tips Granthum shared were writing down serial numbers for guns and other valuable items and purchasing an alarm/surveillance system.

“A model number is no good. You’ve got to have a serial number. Find somewhere to put a seral number on a piece of paper. Put it in a safe spot,” he said.

“I probably have over 10,000 guns at the sheriff’s office that I can’t give back. It probably is their gun, but if you can’t prove to me it’s your gun, I can’t give you a gun that I don’t know for sure is yours.”

He also suggested putting a generic sign for a security system in your yard instead of a specific once, which could tell a rogue technician how it is wired depending on the company.

He also suggested hiding DVRs for surveillance systems in a safe spot. He said in many instances, the DVRs have been with other electronics and have been stolen, which doesn’t do them any good in solving the case.

Capt. Fowlkes with the Selma Police Department was also there. She told citizens that the department has a plan in place to stop a recent rash of armed robberies and other crimes that have taken place in Old Town lately.

She also emphasized the importance of knowing your neighbor and reporting suspicious activity.

“We encourage you all to build a rapport with one another because it takes a community to help us, and we rely on you all. We can’t solve the crime without you all,” she said.

Fowlkes said violent crime in the city is down 55 percent compared to previous years.

Brendan Wyatt, an Old Town resident, ended the meeting by discussing the idea of the neighborhood coming together to pay for an off-duty officer to patrol. He also pitched the idea of having citizens chip in money to purchase a surveillance system for the area that could help capture crime on camera.

Old Town Neighborhood Watch is one of nine active watch groups throughout the city, according to Fowlkes.