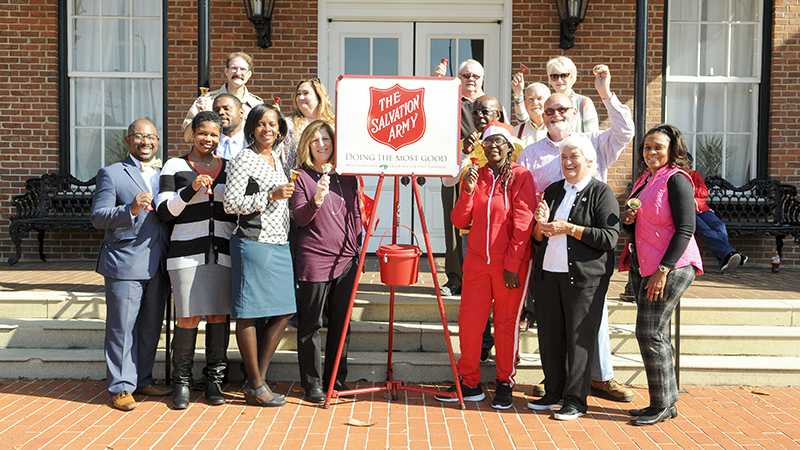 The local Salvation Army kicked off its Red Kettle Campaign for the Christmas season on Thursday outside Selma City Hall.

The Salvation Army kicked off its Red Kettle Campaign Thursday in front of Selma City Hall.

Board members, volunteers and city leaders gathered on the front steps to ring their bells and let the community know the giving season for the Salvation Army has begun.

“Our red kettles are going to go out throughout the city, and we’re going to try to raise money to help support our efforts throughout the year,” said Monique Brech, director at the Salvation Army Service Center in Selma.

Brech said the Red Kettle Campaign marks the beginning of the Salvation Army’s Christmas season, and it is also the organization’s biggest fundraiser of the year.

Taking part in the Red Kettle Campaign is simple, Brech said. All it requires is putting money, no matter the amount, in one of the red kettles around Selma.

“Every penny adds up. Even if you think it’s a small donation, it grows and grows and grows, so even if you just put a quarter in that will help,” she said. “Any little bit helps. It all adds up, and it’s all going to help people in our community.”

The Salvation Army provides a number of social services, such as assistance with food, clothing, utilities and rent. They also help families in emergency situations, such as a house fire or the sudden loss of job. It also supports the Angel Tree Program, which helps provide children with Christmas gifts.

“This money that we raise will help support our social service efforts throughout the year. It will last us until probably May,” Brech said.

The Red Kettle Campaign is driven by volunteers that take time to ring the bells.

“The more volunteers we have, the more money we get to keep in house,” Brech said.

Sometimes the Salvation Army has to pay bell ringers when there are not enough volunteers. Henry Allen’s job is to make sure that doesn’t happen. He is the volunteer coordinator.

“What I do is gather up volunteers,” Allen said. “Church groups, civic organization groups and individuals who feel like ringing some bells. We go out and recruit them.”

Allen has been the volunteer coordinator for the last several years.

Brech said the Salvation Army had around 300 children for the Angel Tree Program. She said churches and other organizations have already gotten their angels, but there are still some available.