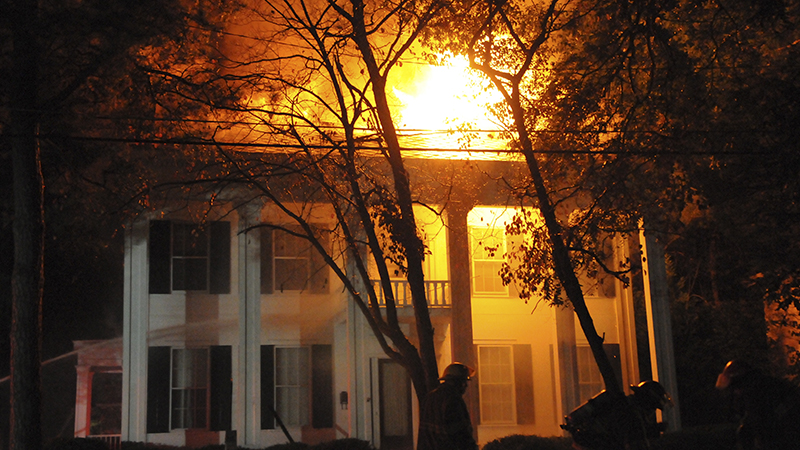 The second floor, attic and roof of the historic Lee-Bender-Butler house was damaged Tuesday night in a fire. The home was built circa 1850 and renovated by Roger and Dolly Butler in the 1980s.

When Roger Butler got news Tuesday night the historic home he restored and lived in for 25 years on Church Street was burning, he had to see it for himself.

Butler said he watched Selma firefighters battle the blaze as flames erupted from the roof of the Lee-Bender-Butler House.

“I came and watched it and took some pictures,” Butler said Wednesday. “It hurt to see it go, but I was grateful I didn’t still own it.”

The fire started around 7 p.m. Tuesday night. Witnesses said the current homeowner, Jeffery Estrada, found the fire and called 911. They said he was able to get out, along with his cat. He could not be reached for comment Wednesday.

The Selma Fire Department responded to the scene and battled the flames for a few hours. It is unclear what time the fire was put out, but a crew was still on the scene at 11 p.m. The majority of the blaze appeared to be contained to the roof and the second story of the 4,200-square-foot Greek Revival home, but the extent of the damage is unknown.

The home was built circa 1850 by Thomas Helm Lee, who also built Sturdivant Hall. According to a historic marker in front of the home, Lee was a master builder and owned a lumber yard in Selma. He is also believed to be the cousin of Robert E. Lee, commander of the Confederate States Army.

“He made this little house sort of a semi-miniature Sturdivant Hall,” Butler said. “It was a lot smaller in that house than it was at Sturdivant Hall, and the columns were a lot less expensive because they were square instead of round.”

Lee died in 1855, and the home was acquired by the Bender family. Butler said the Benders owned the home for around a century until it was passed on to his family.

Butler said Annie Bender, who taught piano lessons to hundreds of people, passed the home on to his aunt Mary when she passed away.

“My aunt told her whatever you do, don’t leave this house and your belongings to me. I’m too old to have to fool with it,” Butler said. “Low and behold, she did. She left the house and all her belongings to my aunt.”

Butler said she sold the house to his grandfather, who divided it up into six apartments. Years later, Butler said he inherited one-eighth of the home.

“My uncle wanted to sell it for about $30,000, and I said uncle Pete, that’s ridiculous. You can’t sell that house for that,” Butler recalled. “He said boy, if you believe that then put your money where your mouth is.”

So, he did. Butler said he bought the other seven-eighths from his uncle and restored the home. He said he lived there from the 1980s until 2008.

“It meant a lot to us because we had restored it, and it was very nice,” Butler said. “We loved the old house.”

Butler said he has many memories from living there, especially of Thanksgiving and Christmas dinners and the parties they would host.

“We had an antique dining table that we found that was pretty long. I guess it was about 20 feet long, and we would set that thing up in one of the rooms … and then we would have as many relatives as we could sit around that thing,” he remembered.

The fire remains under investigation, but arson is not believed to be the cause.