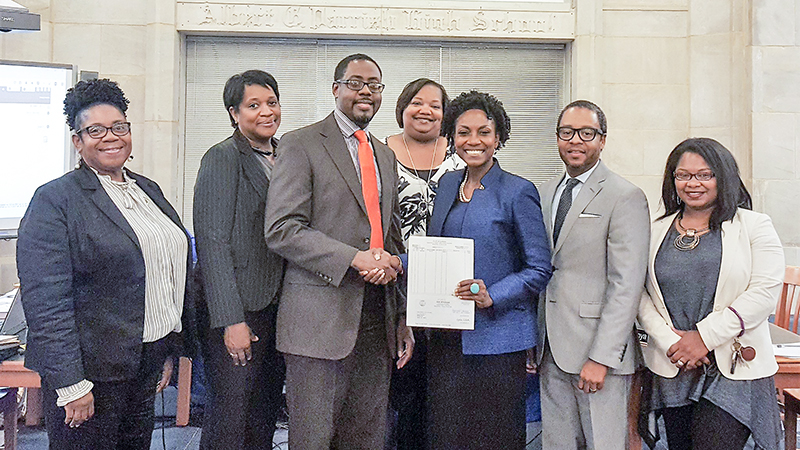 State Rep. Prince Chestnut awarded Selma City Schools with $12,000 in grants last week, and he will soon do the same for Dallas County Schools.

Chestnut said the grants are from the State Executive Commission on Community Services Grants through the House Ways and Means Education Committee.

“I’m just fortunate that we could get it because I went in kind of late in April, so I was a little doubtful I would be able to get anything, but we were able to get $1,000 for each of these schools,” Chestnut said.

“You really desire as an elected official to be able to get something to provide for the kids that live in your district. That’s the part that’s gratifying about this office.”

Chestnut presented the grant to Selma City Schools last Thursday during a board of education meeting at Selma High School.

“We’re just excited,” said Johnny Moss, president of the school board. “Any time you can get additional funding for your schools, that’s very important. We’re just glad we’ve got a partner in Montgomery with Rep. Chestnut.”

Each city school was awarded $1,000, except for Selma High School, which was awarded $2,000 to go toward the school’s Career Technical Education Work Force Program.

“The importance of having students have a career work path when they leave high school is very important, and any time we can get additional funding for those programs, it’s very important,” Moss said.

Chestnut said technical education is something he focused on when he campaigned.

“For our area, that’s extremely important,” Chestnut said. “For the needs that we have here, giving more there I think that’s justified because we’re trying to get folks ready for the work force.”

Chestnut said each school will use the money for its specific needs. He said some of them listed books and supplies as their needs.

“The beauty of the grant is that the schools can allocate the funds and spend it where they feel it’s going to address the specific needs of the school,” Moss said.

“I think most of the schools will probably utilize the money to kind of supply their war chest for students whether it be books, pencils, paper and for teachers that need those additional items in the classroom.”