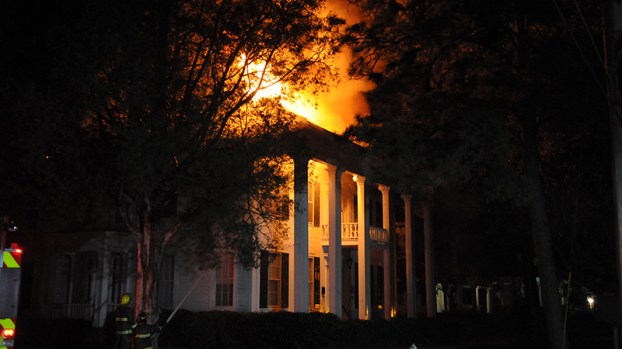 : The historic Lee-Bender-Butler House, built around 1850, burned during a house fire Tuesday evening.

The fire started around 7 p.m. on the corner of Church Street and Parkman Avenue at the Lee-Bender-Butler House, which was built around 1850.

According to a firefighter, no injuries were reported. The homeowner, Jeff Estrada, was able to get out of the house along with his cat, according to witnesses. As firefighters sprayed the roof, the flames billowed higher. The fire appeared to be contained to the attic and second floor of the home.

A crowd of people looked on taking pictures and videos as firefighters tried to subdue the flames coming out of the Greek Revival home.

According to a historic marker in front of the home, it was built around 1850 by Thomas Helm Lee, who was a master builder and owner of an early Selma lumber yard. The home was restored in 1982 by Roger and Dolly Butler.

The extent of the damage is unknown at this time. As of 9 p.m., firefighters were still trying to put the flames out.

Check back online and in Thursday’s edition of the Times-Journal for an update to this story.

State Rep. Prince Chestnut awarded Selma City Schools with $12,000 in grants last week, and he will soon do the... read more