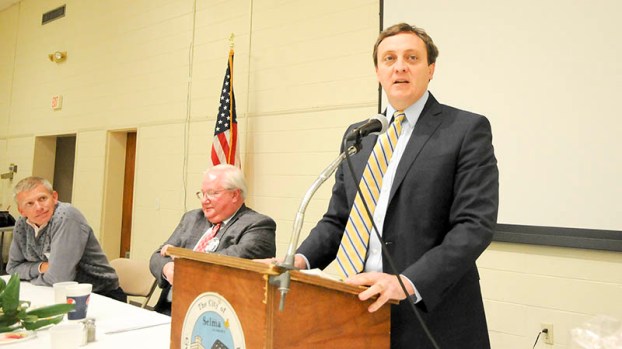 Associate Commissioner and COO of the SEC Charlie Hussey addresses the Selma QB Club in their final meeting of the year.

The Selma QB Club held their final meeting of the year Monday evening at the Selma Convention Center.

The club wrapped up the year with its “Big Ticket” drawing for the $10,000 prize. The club sold more than 200 tickets to both club members and non-club members to help raise money for their scholarship fund. The tickets were sold out by the sixth meeting of the year.

The “Big Ticket” generates 50 percent  of the scholarship fund according to finance chairman Forrest Hatfield. This year’s winner was Layne Talbot.

The final guest of the QB club was associate commissioner and COO of the South Eastern Conference Charlie Hussey. The University of Mississippi graduate has worked with the SEC offices since he was an intern in 1998.

The QB Club always presents its guest speaker with a gift as an additional thank you, but Hussey generously donated his gift back to the QB Club’s scholarship fund.

“It was exciting to be here at this club, being the second oldest quarterback club in the state,” he said. “It was an opportunity tonight for the SEC to talk a little more about the SEC. The goal tonight was to tell the room a little something they didn’t know about the SEC.”

Closing the year with Hussey as a speaker was fitting, because instead of having a tie directly to The University of Alabama or Auburn University, he represented the conference and its interests as a whole.

He provided his audience with an inside look into how the conference operates and has grown.

The SEC Network, which is based in Charlotte, North Carolina, is in its fourth year and covered more than 1,600 events this past year. It hosts programs such as SEC Nation, SEC Stories and more.

After concluding his speech and answering questions from the audience, Hussey wrapped up with several trivia questions and awarded the correct answers with SEC hats.

Before the prize drawing, Hatfield and club president Perry Woodruff offered their thanks to the committee members and chairmen that worked on behalf of the club throughout the year.

“I think it’s one of the better years we’ve had in quite a while,” Woodruff said. “Membership was up more than 30 percent. We had great turnouts and scholarships couldn’t have gone any better. It was a fantastic year.”