All who served honored during annual Veterans Day program 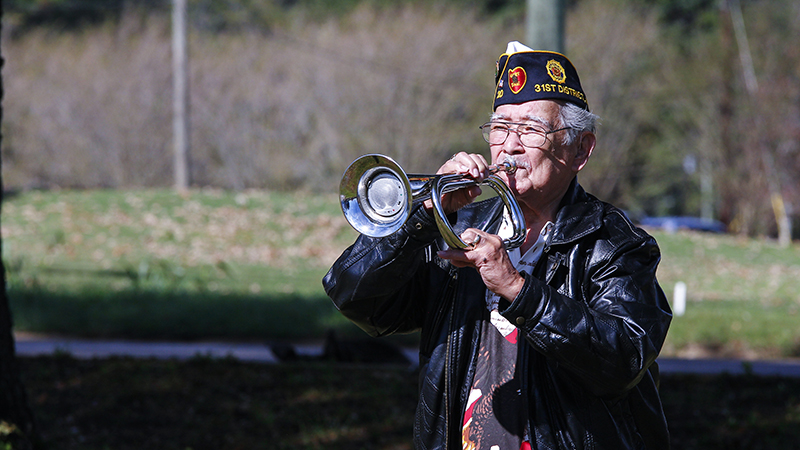 The sounds of the National Anthem, “America the Beautiful,” “God Bless the USA,” and “Taps” played out Saturday at Memorial Stadium to honor those who have served.

The annual Veterans Day program is put on by the American Legion Thomas R. Mackin Post No. 20.

Brown was deployed to Iraq as part of Operation Iraqi Freedom.

“As a current service member, I must say it’s an honor to put on this uniform today and wear it proudly as I stand here before you,” Brown said. “I will always look back on my decision to join the military as one that set the foundation for many successes in my life.” 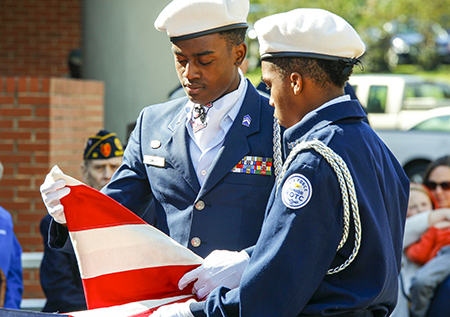 Brown talked about enlisting right out of high school in 2003 during a time of war and being deployed two years later.

“Going to war is scary. The unknown always is. And leaving family and friends is lonely. Though, I could call home periodically, being 8,000 miles away from home and family is tough and really is the worst part of any deployment,” Brown said.

Brown said that while phone calls with 10-second delays at the time seemed tough that he now considers that communication “priceless.”

“I had it easy with the invention of the internet and instant messages, though at the time I didn’t think so,” Brown said.

In addition to the music and words from Brown, the ceremony also include the presentation of colors and a flag folding ceremony from Southside High School Air Force JROTC.

Veterans stood as anthems for the Army, Navy, Air Force, Marines and Coast Guard were played in a medley and laid wreaths at the war memorials outside the stadium.

“I along with so many of these veterans, appreciate the effort that some of you go through to make this thing possible,” Jones said.

It coincides with other holidays, including Armistice Day and Remembrance Day, celebrated in other countries that mark the anniversary of the end of World War I.

Major hostilities of World War I were formally ended at the 11th hour of the 11th day of the 11th month of 1918, when the Armistice with Germany went into effect. The United States previously observed Armistice Day.

The U.S. holiday was renamed Veterans Day in 1954.