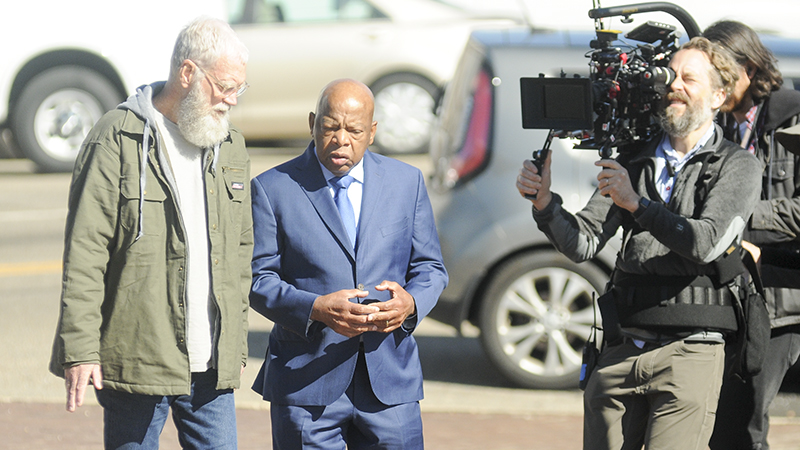 Former Late Night and The Late Show host David Letterman spent Thursday night and most of Friday in Selma filming a segment for a new Netflix series.

Letterman, who retired from late-night television two year ago, walked across the Edmund Pettus Bridge and interviewed Congressman John Lewis while a film crew captured it all on camera Friday morning.

“You can’t really be alive in this county or any place in the world and not know of [Selma],” Letterman said. “It’s iconic. It’s historic. Something breathtaking happened here. The level of change and the level of positive change that this place represents is remarkable.”

The crew also filmed Letterman and Lewis inside of the Voting Rights Museum.

The show, which has yet to be named, will be much different than what the audience is used to seeing with Letterman. The show is a six-episode series that will combine in-depth interviews and in-the-field segments.

According to a film permit, the episode being filmed Friday will focus on the Voting Rights Movement.

During his stay, Letterman said the people of Selma left a good impression on him.

“We’ve only been here a few hours, but my impression of Selma in fact is entirely different than I thought it would be, you know,” Letterman said Friday. “And beyond that, a factor that I hadn’t even considered, the people have been so nice to me. I’m so unaccustomed to people being nice to me that it’s just made it a delight.”

This wasn’t Letterman’s first trip to Alabama. He has visited Montgomery, Birmingham and even the gulf coast.

Letterman patronized several Selma restaurants during the shoot, including The Coffee Shoppe, The Downtowner, Tally-Ho and the original Lannie’s BBQ Spot, where he continued filming and ate lunch with Lewis Friday afternoon.

“Let’s just say if you and I went in there for lunch and came back for dinner, we’d be dead,” Letterman said with a laugh after lunch.

Tally-Ho Restaurant owner Paul Wilkerson said he no idea he was cooking dinner for Letterman Thursday night until the server came back to the kitchen and told him.

“She came in, and she said don’t freak out, but David Letterman is out front. I was like, really? You get nervous when somebody is coming in like that,” Wilkerson said. “You want to make sure the food and all is great.”

Wilkerson said Letterman ordered the grouper Pacifico and after dinner he got to talk with him and even take a photo.

“It was neat and different,” Wilkerson said. “We’ve had a lot of celebrities over the years, but to me a celebrity is different than somebody like him just because he is someone you saw every day on TV your whole life, or at least my whole life, for every late-night show.”

Letterman spent 33 years in late-night television. He hosted 6,028 episodes of Late Night and The Late Show and is the longest-running late-night broadcaster in America.

The Netflix series is set to debut sometime in 2018.