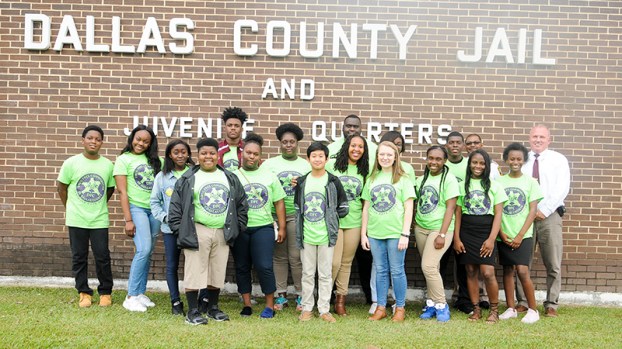 A group of students in the Drug Free Communities of Dallas County program got a firsthand look at what life is like behind bars Wednesday.

The group, which consisted of around 15 students from Selma and Dallas County schools, took a tour of the Dallas County Jail to see the impact of drugs on young people in the community.

“I was really excited,” said Keith senior Tarkela Spicer about getting the opportunity. “I know it sounds horrible for me to be excited to go to jail, but I was just excited for a new experience.”

Jerria Martin, director of Drug Free Communities of Dallas County, said she decided to take the students on a tour to let them see what jail was like in person.

“You see ‘Beyond Scared Straight’ where they have the troubled kids going through the jail to kind of scare them straight, but these kids are actually our rising stars,” Martin said.

As the students awaited Capt. Mike Granthum with the Dallas County Sheriff’s Department to lead them through the jail, some of them felt nervous, while others felt excited about the experience.

Dallas County freshman Abby Wright said she felt nervous and expected to see what she has seen in movies and on television but it was much different.

“It really wasn’t as bad as I thought it would be,” Wright said.

The tour started with the booking process. Tracy Sanders showed the students how she books an inmate into the county jail, which includes finger printing and taking a mugshot.

The students were then taken into the main part of the jail where they saw how inmates live.

“I expected to see people out of their cells kind of moving around and probably talking,” Spicer said. “It was kind of different. Everybody was in their space, and it was kind of a sad vibe. It was quiet and when you walk in it’s kind of like feeling like everything is just over.”

That’s the exact feeling Granthum said he wanted the students to get.

“I hope they see that any little mistake they make when they break the law, even if it is their first crime, that jail can be the consequences, that jail could actually be the end result no matter how big or how small the crime may be,” Granthum said.

There are over 160 inmates currently housed in the county jail, which can hold more than 200, according to Granthum.

“A high percentage of our crime is related to dope,” Granthum said. “They’re either breaking in houses to get their dope, they’re robbing, they’re stealing. When they’re on dope, they commit domestic violence crimes and stuff.”

Near the end of the tour, the students entered the area where female inmates are kept. An inmate in her 60s, who was in for drug charges, shared some of her story of being addicted to drugs for more than 40 years.

“That’s the reason right there why I brought these kids out here,” Martin said.

Granthum said he could tell by the looks on many of the students’ faces that the tour made a lasting impression.

“As we were walking out I could see some of them breath deeper to get the fresh air,” Granthum said. “We’re just trying to make these young people realize and let them know that they’re building their resume now for life and just stay away from dope altogether, drugs, alcohol or whatever it may be.”

The deadline to register for the Selma-Dallas County annual Christmas parade without a late fee has been extended. Sheryl Smedley,... read more