Special attention put on adoptions during the month of November 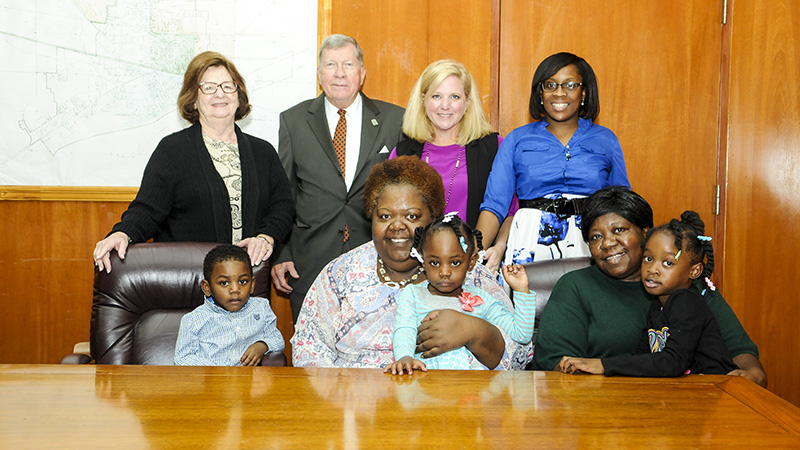 Ida Morgan and Dorene Mitchell have taken care of their foster children since they were less than a year old, but now they can legally call them their own.

The two foster parents completed the adoption process Monday at the Dallas County Courthouse during a hearing in the probate office.

“I’ve gone through this three times, and this makes the fourth, and it’s a blessing to be here to go through this,” Morgan said after the hearing. “Right now, it makes me feel like I have done something to help somebody.”

Morgan adopted 5-year-old Kammryn, who she has cared for since she was just 6 months old.

“This child, she’s all devoted to me. I’m devoted to her. It’s all mama, and by being a single parent, I’m all daddy too,” she said.

Kammryn is the fourth child Morgan has adopted, and she said if given the opportunity, she’d do it all over again.

“I love them just like I brought them into the world. I don’t see them any different than I see my biological children, she said. “They call me mama; I call them baby. They’re mine. I love them all the same.”

Morgan said she has fostered a total of 33 children after her own two children were grown.

“I feel like I’m there to help these children, and that’s what I did,” Morgan said. “I devoted myself to my kids. Every time [DHR] said they [had a foster child] I didn’t turn them down.”

Mitchell adopted 2-year-old twins Kaleb and Kensley, whom she has cared for since they were just 9 months old. She said she never had intentions to adopt them, but she is glad she did when she realized their mother wasn’t going to get them back.

“I wouldn’t dare let these kids go anywhere else,” she said. “As you keep kids, you kind of develop a bond with them, and it’s like these are my babies. I am not giving them up.”

Mitchell said the twins are a handful, but they are a bundle of joy.

Mitchell said the experience of a adopting a child is a long process, but it is worth it. She encouraged others that want to adopt to give it a chance.

“Don’t be scared,” she said. “It’s a lot to go through the process, but I think the process is well worth it because DHR tries to find the right type of people. … You actually have to have a heart for kids.”

“Doing the adoptions is one of the most rewarding parts of my job,” Dudley said. “To see the families come together, to see the children get forever homes with people who are going to love them and treat them well, is rewarding, to say the least.”

Dudley said most of the adoptions in Dallas County are to foster parents.

“We have a great group of foster parents here in Dallas County,” she said. “They provide great care to the children, so if we’re at the point where the parents can’t get them back, usually the foster parents are considered because they’ve done so well with them.”

Dudley encouraged anyone interested in the adoption process to contact the office at (334) 874-1400. She said families can also go online to www.dhr.state.al.us, www.adoptuskids.org or www.heartgalleryalabama.com to see profiles of children up for adoption.