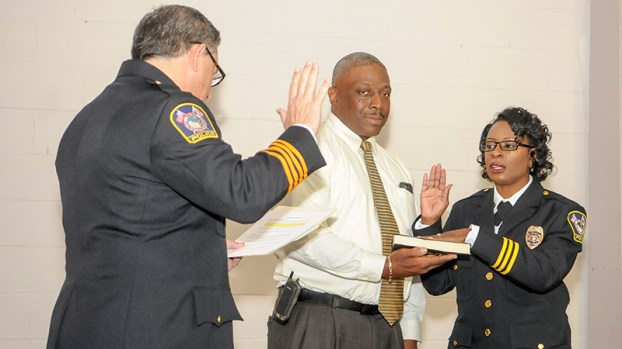 Natasha Fowlkes is sworn in as the Selma Police Department’s newest captain Thursday.

Natasha Fowlkes made Selma Police Department history Thursday when she became the first African American woman to be promoted to captain.

Three other officers were also promoted at the George P. Evans Building Thursday by Selma Police Chief Spencer Collier and Mayor Darrio Melton. Evelyn Ghant was promoted to lieutenant, and Mark Neely and Michael Kiser were promoted to sergeant.

“I take it as a privilege and an honor to serve the department as the first African American female captain,” Fowlkes said Thursday after taking her oath. “It’s an exciting moment.”

Fowlkes is now one of two captains in the department. The other is Capt. Johnny King, who has been with the department for 30 years. Fowlkes will oversee administrative functions including personnel, IT, finances, jail booking, traffic and the K-9 unit. She is a 14-year veteran of the Selma Police Department. 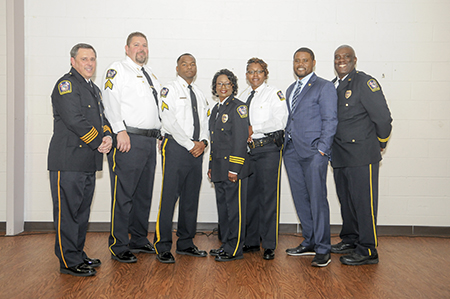 “I love new challenges that make me stronger and make me sharpen up my skills,” Fowlkes said. “I thank my boss, Chief Collier for granting me with this opportunity and distinguished promotion. I thank him for seeing in me what a leader should be.”

Lt. Ghant has been with the department for 14 years and previously served as an internal affairs investigator. She is only the second African American woman to reach the rank of lieutenant in the department.

“This is an emotional and an exciting day for me just to be a part of history with my co-worker,” Ghant said. “This is a special moment for all of us.”

Fowlkes and Ghant said they hope they can serve as role models to young women in the community and their promotions can serve as encouragement.

“Maybe this will encourage other females to stay in law enforcement and one day look forward to going up the ranks,” Fowlkes said.

Neely has been with the department for six years and serves as the recruiting and training officer. He will now also serve as the public information and education officer. Neely said he was proud of the promotion.

“My expectations are always high because I just expect to do good,” Neely said. “I expect to excel at whatever I’m doing. I expect to meet and exceed whatever standard is placed before me.”

Kiser serves as a narcotics investigator in the Criminal Investigation Division and is a K-9 officer. He will now lead the K-9 unit, which was recently increased to four K-9s.

“I’m very proud of [this promotion], but the thing I’m proud the most of is the department and how far it’s come in the last few months,” Kiser said.

“It means a lot to me, not just the rank but the recognition of what I do.”

These were the first promotions Collier has made since taking over as chief earlier this year.

“I had a group to pick from. I’ve taken the last eight months and had a chance to pay attention,” Collier said. “I feel confident in all of our officers, but I feel very confident in the four we promoted.”

Another armed robbery in the downtown Selma and Old Town area was reported Wednesday night bringing the total up to... read more