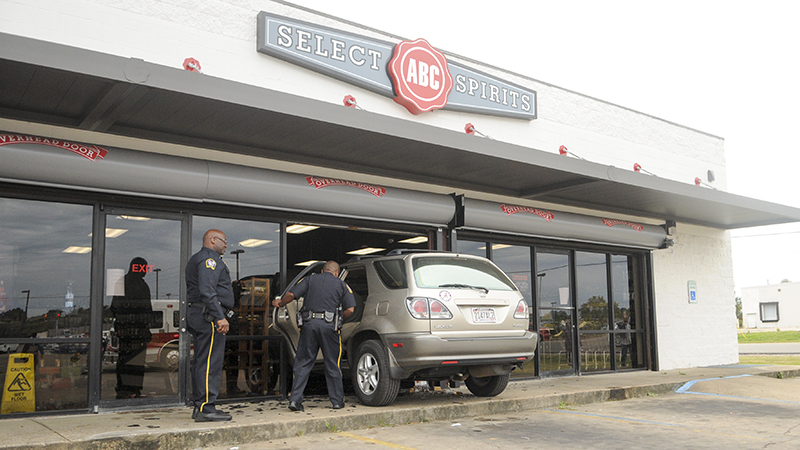 A cashier at the ABC store on Marie Foster Street was injured Wednesday after a car crashed though the store. (Blake Deshazo | Times-Journal)

A cashier at the ABC store on Marie Foster Street was injured Wednesday afternoon after a car crashed through the front window.

It happened shortly before 1:30 p.m. The driver of the vehicle, Larry McCarthy, was not hurt, but the cashier, who was pinned between the caved-in window, a shelf and the counter, was transported to Vaughan Regional Medical Center.

The extent of her injuries is unknown at this time. McCarthy said he was at the store to pick up a bottle of scotch for a friend when he accidentally drove through the store.

“It just accelerated. I must have thought I was putting on the breaks and put on the gas,” he said. “It just sped up and went right through the damn window.”

The scent of alcohol from broken bottles lingered through the air and across the parking lot, as Selma police officers and fire fighters worked the scene.

Sgt. Kendall Thomas with the Selma Police Department said it was an accident and alcohol did not play a factor in the crash.

McCarthy was eventually able to back his vehicle out of the store and into a parking spot with little damage to the car.

Keith Hunter, who works there, said he had just finished ringing up a customer when the accident happened.

“I was ringing up a customer and all of a sudden I heard a loud boom and I saw the car come in,” he remembered. “I ducked on the floor, and all I heard was screaming. I was scared to even get up.”

Hunter said when he looked up he saw the cashier pinned down behind the register.

“They put her on a stretcher and took her out,” he said. He said she was cut up but wasn’t sure how bad she was injured.

Hunter said seeing a vehicle come crashing through the window wasn’t something he was expecting. He said it was like something from a television show.

The extent of the damage done to the store is unknown at this time. Store employees were not sure when the store would reopen for business.

Thomas Scott contributed to this report.